Author Rich Adams publishes the intriguing story about the man behind the most loved Christmas tale in “Eben Kruge: How ‘A Christmas Carol’ Came to be Written.” 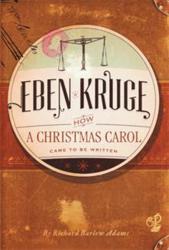 In celebration of the 200th birthday of Charles Dickens, United Kingdom’s most prolific, adored, and influential author, and just in time for the Christmas season, author Richard Barlow Adams publishes Eben Kruge: How “A Christmas Carol” Came to be Written. Adams’s new book is the intriguing story about the man behind the most loved Christmas tale, his life and his times.

What is it about Charles Dickens’s A Christmas Carol that propels so many readers, annually, to reread the “ghost story of Christmas” and watch its many film and play productions? What is the fascination? Did people not “get it” the first time, or fifth time, or 20th time? Or is it, simply, that people are yearly drawn to old friends with whom they have “grown up”, and who have witnessed their “growing up;” friends like Jacob Marley, Bob Cratchit, Tiny Tim, old Fezziwig, the ghosts of Christmas past, present, and future, and, of course, Ebenezer Scrooge. Are people not drawn to the wonderful themes in the story that weave in and around the real meaning of Christmas?

But what of the man who penned the Carol? What was he like—the writer, social reformer, businessman, husband, father, son, sibling, and friend? What circumstances framed his past and present when he sat down to write the Carol?

Eben Kruge is a story that explores these and other questions behind why Charles Dickens wrote A Christmas Carol in 1843, the first of five short fictions in a six-year period, termed his Christmas stories, which would include The Chimes (1844), The Cricket on the Hearth (1845), The Battle of Life (1846), and The Haunted Man and the Ghost’s Bargain (1848). Eben Kruge is a story that invites readers into the life of Charles Dickens.

Adams successfully weaves together well-known and little known facts about Dickens, including the secret he took to his grave, which led to his frenzied writing of the most famous of all Christmas fables. Readers will experience with Dickens what triggered his imagination to write the most beloved Christmas story of all time.

About the Author
Rich Adams (http://www.RichardBarlowAdams.com), in his first novel, The Parting: A Story of West Point on the Eve of the Civil War, tells a true story of the West Point Class of 1861, and draws upon, among other things, his background as the first of three brothers to graduate from West Point, sons of an Army colonel. The Parting is the recipient of a five-star Clarion Foreword Book Review. As he pursues his writing, Adams continues to serve as a consulting forensic engineer, and is a part-time ski instructor at Beaver Creek, Colorado. He also enjoys sharing his faith, traveling, lecturing, golfing, hiking, and biking. He and his wife have two married children, several grandchildren, reside part of the year in Sandestin, Florida, part of the year in Denver, and are members of the Destin United Methodist Church.