New work explores influence of the Book of Common Prayer 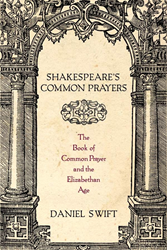 Groundbreaking, historically informed, elegantly written, and invaluable for anyone interested in a deeper understanding of Shakespeare and religion in Elizabethan England.

A new book by Dr Daniel Swift, Senior Lecturer in English at New College of the Humanities (NCH), presents his research into the influence of the Book of Common Prayer on the works of Shakespeare. Shakespeare's Common Prayers: The Book of Common Prayer and the Elizabethan Age has been released today (Thursday 22 November). In the work, Dr Swift provides an overview of recent developments in historical studies and literary criticism, as well as informing his argument with original archival research.

The Book of Common Prayer was first published in 1549, and established Protestantism as the compulsory belief of the day. Dr Swift discusses the passionately contested revision of the Book of Common Prayer, and the controversy that frequently sprung up surrounding the use of particular verbs or turns of phrase, and argues that Shakespeare took inspiration from this controversy.

Dr Swift argues that Shakespeare found ready elements of drama in the deliberations and disagreements around the language used in the Book of Common Prayer. He looks at features of Shakespeare’s work such as dispute over words and their practical consequences, the fear of meaninglessness in language, and the demand for improvisation when language fails to do what it appears to promise.

Professor A C Grayling, Master of NCH said: “Daniel’s research into Shakespeare’s use of the Book of Common Prayer takes a highly original standpoint at the crossroads of literature, religion and history, and will be a fascinating volume for experts and interested amateurs alike.”

“Daniel’s work sheds a new light onto Shakespeare’s work and time, and demonstrates the way in which documents such as the Book of Common Prayer can become definitive cultural cornerstones that inform our way of describing and engaging with the world around us through language.”

James Shapiro, Professor of English and Comparative Literature at Columbia University, has described the book in a review as: "Groundbreaking, historically informed, elegantly written, and invaluable for anyone interested in a deeper understanding of Shakespeare and religion in Elizabethan England."

In the book, Dr Swift offers a study of Shakespeare at work and argues that the Book of Common Prayer mediates between the secular and the devotional, producing a tension that helps make Shakespeare's plays so powerful and exceptional. Dr Swift focuses his analysis on As You Like It, Hamlet, Twelfth Night, Measure for Measure, Othello, and particularly Macbeth, redirecting scholarly attention to the religious heart of Shakespeare's work and time.

Shakespeare's Common Prayers: The Book of Common Prayer and the Elizabethan Age is published by Oxford University Press, and will be available from 22 November 2012.

Notes to Editors
New College of the Humanities (NCH) offers a new model of higher education for the humanities in the UK. NCH students enjoy one of the best staff-to-student ratios in UK higher education and benefit from a high number of quality contact hours as well as engaging and challenging one-to-one tutorials.

Our Professors are international experts in their fields and our full time academic staff members have been selected for their proven ability for teaching in addition to their research interests.

NCH welcomed its first intake of students in September 2012 and prepares students for undergraduate degrees in: Economics BSc; English BA; History BA; Law LLB and Philosophy BA. The College has recently announced that the Politics & International Relations BSc will also be offered from 2013.

In addition to their 12-module degree, all NCH students study a further seven modules. This is comprised of four modules from another degree subject or Politics as a contextual course and three core modules in Applied Ethics, Logic & Critical Thinking and Science Literacy. All students also follow the College’s Professional Programme.

In 2012, NCH made offers of full Scholarships, or generous Exhibitions to over 30% of applicants.

Scholarships are means-tested and cover the full cost of tuition over a three-year degree. These are awarded on academic merit, and students applying for these places will need excellent academic potential.

Exhibitions are based solely on academic excellence and the potential for a student to excel during their time at NCH. All students applying to NCH are automatically assessed for an Exhibition. Exhibition students pay £7,200 per year, a fee lower than that charged by many UK institutions.