Students asked to describe the true meaning of the holidays 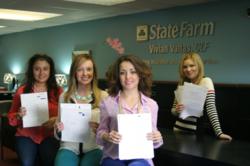 This contest is a great opportunity for children to really express themselves and be rewarded for their hard work, creativity and positive attitude toward others.

State Farm Insurance Agent Vivian Valtas has announced the start of the third annual Twelve Days of Christmas Bike Giveaway, an essay contest that promotes literacy and creative writing among students in the Chicago metro area. Winners of the contest will receive a bicycle courtesy of Valtas’ State Farm office.

The contest gives students ages 7-12 the opportunity to craft an essay describing their ideas of what the spirit of Christmas truly means. Essays are collected and reviewed by Valtas and her colleagues, who choose the winners based on the quality and creativity of the contestants’ writing. Each year, more than a dozen bicycles are awarded to students based on their submissions.

“This contest is a great opportunity for children to really express themselves and be rewarded for their hard work, creativity and positive attitude toward others,” said Valtas. “Having these kids write on a topic like the spirit of Christmas encourages them to think about the meaning of the holidays and how they can potentially help others in their community. We’re always thrilled by the creative ideas presented in these essays.”

Students wishing to participate in the Twelve Days of Christmas Bike Giveaway should submit their essays to Vivian Valtas at 5446 S. Archer Ave., Chicago, IL 60638. Along with the essay, students should also specify their height and favorite color to ensure they get the perfect bicycle if they are named a winner. The parents of winners will also be asked to sign a release form allowing for the disclosure of their children’s names and essays to local media outlets.

In addition to the Twelve Days of Christmas Bike Giveaway, Valtas’ State Farm Agency also donates bicycles to the Valentine Boys and Girls Club. The agency is known for its community involvement and focus on local youth, and the contest is just another example of the firm’s continued focus on the human aspect of its services.

About Vivian Valtas: Vivian Valtas holds an MBA from Ohio State University Fisher College of Business, as well as a bachelor’s degree in mathematics education from Youngstown State University. Along with her role as an accredited State Farm agent, Valtas is also on the board of managers of the Valentine Boys and Girls Club.