During a Board meeting of the Wisconsin Department of Agriculture, Trade and Consumer Protection, the Wisconsin Farm Bureau Federation and Sand County Foundation named Jim and Val Hebbe as the recipients of the 2012 Leopold Conservation Award in Wisconsin. 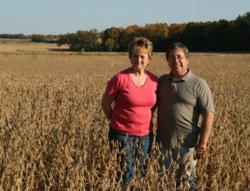 The award announcement was made during the November 14 meeting of the state Agriculture, Trade and Consumer Protection Board. The Hebbe family, from Princeton, will receive the $10,000 award and a Leopold crystal on December 2 at the WFBF Annual Meeting in Wisconsin Dells.

Jim Hebbe has been implementing conservation practices for 25 years and has shared his ideas with other farmers as the Green Lake County Conservationist since 1984.

He and his wife, Valerie, raise 1,100 acres of corn, soybeans, wheat and alfalfa in central Wisconsin. In addition to no-till planting all of the crops, he has worked to develop numerous conservation systems that compliment each other and lead to less erosion and more residue cover on the land.

The farm includes land with a significant slope draining into a Class 1 Trout Stream. A water and sediment basin was constructed to help control and reduce field runoff into the stream. Native prairie grasses were planted in a field that borders the creek. Twenty-five acres of evergreen trees were planted on a farm with light and sandy soil.

In 1985 he helped develop conservation standards for the Farmland Preservation Program participants to control soil erosion to sustainable levels.

The Leopold Conservation Award, named in honor of world-renowned conservationist Aldo Leopold, is comprised of $10,000 and a Leopold crystal. The award is now presented annually in eight states to private landowners who practice responsible land stewardship and management.

The Hebbes were one of our finalists for the Leopold Conservation Award. The other finalists included Justin and Lynn Isherwood of Portage County, Steve and Pat Kling of Jackson County, and Mark and Jan Riechers of Lafayette County. Each received $500 for their conservation efforts.

The first two recipients of the Leopold Conservation Award under the Sand County Foundation and Wisconsin Farm Bureau Federation partnership were the Bragger family from Buffalo County and the Koepke family from Waukesha County.

ABOUT SAND COUNTY FOUNDATION
Sand County Foundation (http://www.sandcounty.net) is a private, non-profit conservation group based in Monona, Wis., dedicated to working with private landowners to improve habitat on their land. Sand County’s mission is to advance the use of ethical and scientifically sound land management practices and partnerships for the benefit of people and their rural landscapes. Sand County Foundation works with private landowners because the majority of the nation’s fish, wildlife, and natural resources are found on private lands. The organization backs local champions, invests in civil society and places incentives before regulation to create solutions that endure and grow. The organization encourages the exercise of private responsibility in the pursuit of improved land health as an essential alternative to many of the commonly used strategies in modern conservation.

ABOUT THE WISCONSIN FARM BUREAU FEDERATION
The Wisconsin Farm Bureau Federation (http://www.wfbf.com) is Wisconsin's largest general farm organization. It represents nearly 23,000 farms and agriculturists who belong to one of 61 county Farm Bureaus found across the state. Much like Wisconsin's diverse agricultural landscape, Farm Bureau members represent all farm commodities, and all farm sizes and management styles. Farm Bureau's mission is to lead the farm and rural community through legislative representation, education, public relations and leadership development.