Endorsed by astronauts, admirals and astrophysicists, a new techno thriller, penned by a former Navy fighter pilot with a Top Secret clearance, may be too real. Order Resurrect only on November 20th at http://www.resurrecttrilogy.com/ and be entered to win the latest Kindle Fire HD plus have a future character named after you! If you like John Grisham, you will love this. 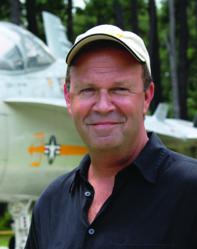 Resurrect, the first apocalyptic thriller in the in the Resurrect Trilogy, written by talented Nashville-area writer Commander Dave Stevens will be a November release from Lion Hudson PLC, a division of Monarch Books, based out of the U.K. The book will be in stores across North America on November 20th, 2012. "A must read. If you like Clancy, Crichton, Collins or Cussler, you'll love this book!" - Lila Lee Person, author.

Resurrect combines the very human with the grandly cosmic. Preventing his burning fighter from crashing into a neighborhood, Navy Commander Josh Logan ejects ... too late. Critically injured, he's offered a new life and mission - exploit highly classified military technology to stop a global cataclysm. The price? He'll be dead to everyone he knows.

Commander David E Stevens, a former Navy Commander and F-18 pilot, is a self-professed adrenaline junky who loves science and technology. He holds engineering degrees from Cornell and The University of Michigan, with graduate work in human factors and astrophysics. During the Iraqi invasion of Kuwait, Dave served as the Navy Strike Operations Officer for the Persian Gulf. He also test-piloted new fighters, received an aviation patent, and with a Top Secret clearance, led classified defense programs.

Stevens has penned the only science based apocalyptic metaphysical techno thriller in existence by creating a story that takes the reader on an adventure that unfortunately could become only too real.

Stevens says “Resurrect isn’t just a thriller; it has a purpose. I’m offering readers a chance to save the world with just the purchase of this book because I’m donating a significant portion of the book’s profits to organizations tackling these threats.”

Orders of Resurrect are being taken at http://www.resurrecttrilogy.com and those who order on November 20th will and be entered to win the latest Kindle Fire and have a future character named after them.

Dave is available for interviews and speaking engagements!Learn more about Resurrect and the Trilogy