The famous development that Waterfront Properties and Club Communities specializes in has served as the site of the tournament since 2009. 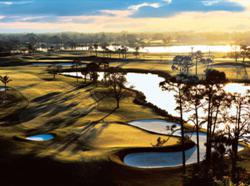 The Champion course at PGA National

Three of the four semifinalists in last year’s Boys Division also returned to the home of The Honda Classic with their eyes on the title.

Twenty Floridians will face off in the field during the 2012 Polo Golf Junior Classic, a must-watch event organized by the American Junior Golf Association.

The group represents 11 cities in the Sunshine State and includes competitors from six countries – China, Colombia, France, India, Japan and Thailand. According to officials from the American Junior Golf Association, that represents the most diverse group from a single state out of the 33 participating in the tournament.

The tournament gets under way Nov. 17 at PGA National in Palm Beach Gardens on two of the five golf courses. The 156 youngsters, boys and girls between the ages of 12 and 18, will take over the Fazio and Champion courses through Nov. 23.

The event features a combination of stroke and match play, beginning with two days of stroke play. The field then will be cut to 32 in each division for match play.

Nicole Morales, of South Salem, N.Y., is the defending champion in the Girls Division. Morales, 16, defeated Jessica Vasilic in 2011. At No. 6 in the Polo Golf Rankings, Morales would become the third American Junior Golf Association girl to win back-to-back titles if she emerges victorious.

Three of the four semifinalists in last year’s Boys Division also have returned to the home of The Honda Classic with their eyes on the title. Brad Dalke, Parker Derby, Matthew NeSmith and Adam Wood might not garner the international media attention that Tiger Woods, who owns one of the most exclusive homes in Jupiter Island, or Rory McIlroy, a member of The Bear’s Club, command, but the accomplished junior golfers will be watched closely.

The Waterfront Properties and Club Communities sales agents who specialize in PGA National said events such as the American Junior Golf Association are one of the reasons the development is so popular with buyers. Other assets are its central location, which is proximate to Interstate 95, Florida’s Turnpike, The Gardens Mall, Palm Beach International Airport and the Kravis Center for the Performing Arts.

PGA National boasts – in addition to its five championship golf courses – an award-winning restaurant, a chic lobby bar, a high-end pro shop and a resort-style, beach-entry pool. It has a year-round schedule of events that includes everything from charity balls to car shows to concerts.