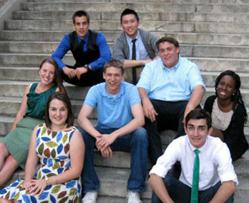 With the success of last weekend’s tournament, the fourth and final tournament for the fall semester, six members have qualified for national competition in April 2013.