That grouchy old Grinch is touring the country again this year. Over 100 performances of the critically acclaimed production are scheduled throughout November and December, starting with two shows in Bloomington, Indiana in mid-November. Productions will run in both Boston and Hartford in November, along with December stints in Richmond, Chicago, New York and Detroit. “Online activity for How The Grinch Stole Christmas tickets is up again this year,” said Felina Martinez at online ticket marketplace BuyAnySeat.com. “While many of the performances are selling at a brisk pace, we still have a great selection of discount How The Grinch Stole Christmas tickets available.” 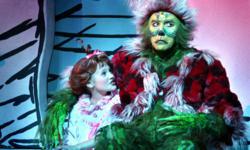 That grouchy old Grinch is back on tour again, stealing hearts in Bloomington, Indiana, before making runs in Hartford, Boston, Richmond, Chicago, New York and Detroit.

The Grinch is back with a vengeance. Despite his best efforts to pilfer the presents and sabotage the happiness of the Holidays – ticket sales to see him smirk, snarl and steal get more festive each year.

Based on the 1957 classic written and illustrated by Dr. Seuss, the musical debuted in 1994 after special arrangements were made with the author’s estate to exclusively adapt and perform the book. Timothy Mason wrote the adaptation and lyrics, while Mel Marvin penned the original score and John DeLuca contributed the choreography. The production opened at the Minneapolis Children’s Theatre Company in November, and was remounted again in 1995 and 1998, playing to sold-out houses every time.

This year’s tour includes over 100 performances, starting with a two-night show in Bloomington, Indiana in mid-November. Productions will run in both Boston and Hartford throughout November, with December stints in Richmond, Chicago, New York and Detroit. The final performance is set for the Detroit Opera House on December 30, 2012.

Ironically, while the original story by Dr. Seuss criticizes the commercialization of Christmas, the book and its movie and musical adaptations have all become commercial successes themselves. In fact, based on a 2007 online poll, the National Education Association named the book one of its "Teachers' Top 100 Books for Children”. Plus, based on a 2012 poll, the School Library Journal called the children’s classic one of the “Top 100 Picture Books” of all time.

The musical debuted on Broadway in 2006, and was Broadway’s first musical to offer 12 performances a week to keep up with the outpouring of demand from fans. The Grinch then went on to break box office attendance records for two consecutive years on Broadway during limited holiday engagements at the Hilton and St. James theatres in New York.

In 2010, after the well-received 2009 Los Angeles production, a national tour ran in the cities of Omaha, Houston, Dallas, Tempe and Toronto. In 2011, the national tour played Providence, Pittsburgh, Atlanta, St. Louis and San Francisco. With a wealth of sold-out performances and year-over-year attendance increases under his belt, it’s no wonder that the Grinch is heading out from his cave atop Mount Crumpit again to irritate and inspire audiences of all ages.

To shop for cheap How The Grinch Stole Christmas tickets, visit BuyAnySeat.com.