Groundbreaking New Book Unravels the Culture, Religion and History of an African People 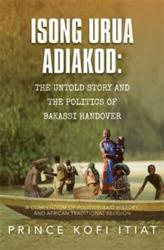 Africa is a continent teeming with a vast and diverse multitude of peoples and ethnic groups, each with their own unique cultures, belief systems and histories. Author Prince Kofi U. Itiat examines the heritage of the Ekid and the Isong Urua in “ISONG URUA ADIAKOD: THE UNTOLD STORY AND THE POLITICS OF BAKASSI HANDOVER”.

Itiat’s work meticulously assesses the cultural makeup of the Ekid and Isong Urua people, from their pantheon of deities, to their various religious rituals and folk traditions, to other cultural practices such as songs and dances, and the sharing of gifts and food. The book also delves into the political issues affecting the Ekid people, such as the unfair territorial partitioning of the colonial powers that previously ruled Nigeria, and the titular Bakassi Handover, when a part of Nigerian territory was handed over to Cameroon. Itiat also makes mention of other problems facing not only the Ekid, but also Nigeria as a whole, such as tribalism and sectionalism, tensions with neighboring Cameroon, and China’s increasing geopolitical influence over the region.

“ISONG URUA ADIAKOD: THE UNTOLD STORY AND THE POLITICS OF BAKASSI HANDOVER” reveals the truth of the Ekid and the Isong Urua, their past, their present, and their future. Itiat’s work is a comprehensively researched and multifaceted compendium that will prove thoroughly informative and insightful for students of history and those wishing to learn more about the histories and issues surrounding the ethnic groups of Africa, and Nigeria in particular.

About the Author
Prince Kofi U. Itiat (FRC) holds BA (Hon) degree in religious studies and philosophy from University of Calabar, Nigeria. He is also a Microsoft-certified system engineering (MCSE), A+ certified system technician from Allied Computer Training College in Chicago, USA. Prince Itiat is a retired superintendent of the Nigerian Customs Service. He is also worked as a network administrator of NextGen Information Systems Incorporated, USA, and AT&T Chicago, as well as network administrator in Salem Technologies Chicago.