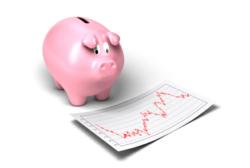 It would be nice if those were the only companies that fell short on their earnings, but unfortunately many more companies are failing to meet their corporate earnings targets.

“It would be nice if those were the only companies that fell short on their earnings, but unfortunately many more companies are failing to meet their corporate earnings targets,” states Lombardi.

In the article “Don’t Look at This Chart if You Are Bullish on Stocks, the Economy,” Lombardi states that other Dow Jones Industrial Average firms recently shared negative news.

He reports that Exxon Mobil, the world’s largest oil company and a component of the Dow Jones Industrial Average, just reported quarterly corporate earnings that were seven percent lower than the same quarter last year, due to a decline in production. (Source: Reuters, November 1, 2012.)

Looking at the broader picture, the Profit Confidential expert states that the Dow Jones Industrial Average appears even weaker in the near term.

“…corporate earnings growth is crucial for any stock index to rise,” reasons Lombardi. “If earnings pull back, there is no real reason for key stock indices to increase.”

Lombardi concludes that the world’s most followed stock market index is technically and fundamentally weaker.

Profit Confidential, which has been published for over a decade now, has been widely recognized as predicting five major economic events over the past 10 years. In 2002, Profit Confidential started advising its readers to buy gold-related investments when gold traded under $300 an ounce. In 2006, it “begged” its readers to get out of the housing market...before it plunged.