Author bends the boundaries of reality in new sci-fi novel

Thomas L. Hay announces the release of ‘An Abduction Revelation’ 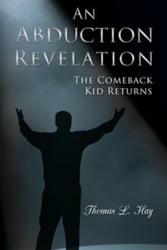 In his new book, “An Abduction Revelation: The Comeback Kid Returns” (published by Balboa Press), author Thomas Hay toes the line between reality and fiction, when he discovers hidden truths that had been buried deep within his subconscious for many years.

These truths were exposed after following the advice of this ex-wife, who had claimed they had been abducted by aliens during their marriage. Her spirit inspired her to become a vegetarian, fast, and abstain from sexual activities. This, according to Hay, melted the memory blocks installed by the aliens and exposed their existence. Readers are taken on an exciting adventure based on seemingly true events from Hay’s life, events which border between reality and imagination.

An excerpt from “An Abduction Revelation”:

“The abductor’s played with me as if I were a child’s favorite doll. After doing whatever was intended, they implanted a memory block, a tracking device, and sent me on my way. Their plan was now initiated. This would be my first, but not my last abduction.”

Hay stirs his readers with a freshly piqued curiosity, reflecting on known truths, and pitting them against the mysteries of the unknown. Who were the abductors? Where did they come from? Where are they hiding? Do they even exist? What he discovered will startle readers’ imaginations.

About the Author
Thomas Hay was raised in Clinton, Mo. and is a graduate of the 1961 senior high class. He retired from TWA/American Airlines. He currently resides in Lake Waukomis, Mo., with the ‘love of his life’, hyperactive squirrels, irritating geese and a cranky 401K.

Balboa Press, a division of Hay House, Inc. – a leading provider in publishing products that specialize in self-help and the mind, body, and spirit genres. Through an alliance with indie book publishing leader Author Solutions, Inc., authors benefit from the leadership of Hay House Publishing and the speed-to-market advantages of the self-publishing model. For more information, visit balboapress.com. To start publishing your book with Balboa Press, call 877-407-4847 today. For the latest, follow @balboapress on Twitter.
###