Global superstar, Rihanna is partnering with LoveLive, River Island and ‘JAY Z’s Life+Times’ to film and live stream the London leg of Rihanna’s historic “777” Tour on the LoveLive YouTube channel (youtube.com/LoveLiveTV) and ‘JAY Z’s Life+Times’ YouTube Channel (youtube.com/JAYZsLifeandTimes) Monday 19 November, commemorating the release of her eagerly anticipated album “Unapologetic.” A preview of the live stream is available now, as a featured video, at: youtube.com/JAYZsLifeandTimes. 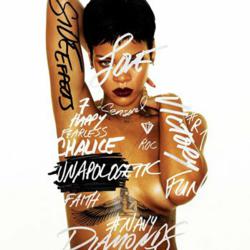 Global superstar, Rihanna is partnering with LoveLive, River Island and ‘JAY Z’s Life+Times’ to film and live stream the London leg of Rihanna’s historic “777” Tour on the LoveLive YouTube channel (youtube.com/LoveLiveTV) and ‘JAY Z’s Life+Times’ YouTube Channel (youtube.com/JAYZsLifeandTimes) Monday 19 November, commemorating the release of her eagerly anticipated album “Unapologetic.” A preview of the live stream is available now, as a featured video, at: youtube.com/JAYZsLifeandTimes.

Fans who log onto LoveLive’s YouTube channel and ‘JAY Z’s Life+Times’ Channel will have the opportunity to experience one of the world’s most successful, award-winning female artists perform in stunning broadcast-quality HD, and all from the comfort of their own homes. The stream is expected to be one of the largest live events ever held on YouTube.

“Diamonds,” the explosive first single from Rihanna’s “Unapologetic” debuted with #1 postings at iTunes in 27 countries, and Top 5 iTunes in 55 countries. On November 10th, Rihanna performed 'Diamonds' on the Saturday Night Live stage, her fourth time as musical guest.

Next, she will embark on RIHANNA DIAMONDS WORLD TOUR beginning March 8th 2013 in Buffalo, New York. The tour is scheduled to stop in more than 27 cities across North America with additional dates to be announced.

Rihanna – the “#1 Person On Facebook” with over 62 million Likes – has sold over 37 million albums and 146 million digital tracks worldwide, and currently holds the record as the top-selling digital artist of all time. The recipient of six Grammy Awards® and seven Billboard Music Awards, she was named the world’s #1 social media star by Forbes, with over 2.9 billion views on YouTube/VEVO, the most ever for any female artist, and over 26 million Twitter followers. In addition to her 11 Hot 100 #1 singles and [now] 23 Top 10 singles, she also has 18 #1 singles on the Billboard Dance Club Song Charts.

Richard Cohen, CEO, LoveLive says: “This is a monumental project for LoveLive, encompassing music innovation and digital content for Rihanna – one of the greatest female artists of our time. We are thrilled River Island and Roc Nation have chosen us to deliver this activation, trusting our unique artist and channel relationships. With the sheer scale of the stream, we hope to demonstrate that through LoveLive’s creation of premium digital content and utilization of channels such as YouTube, both artist and brand objectives can be achieved.”

About LoveLive
LoveLive is the leading provider of high-quality music content and associated services for brands, broadcasters, digital platforms and labels; combining unique access to music rights with digital and marketing capability to create original, authentic and compelling content and campaigns, delivered across a variety of channels.
Established in 2008 by industry entrepreneur Richard Cohen (CEO), LoveLive is run as a partnership together with Sam Jones (COO), former Warner Music Group International Marketing Manager, Toby L (Co-Creative Director) and Tim Dellow (Co-Creative Director), following the acquisition of their online music publication and production unit Rockfeedback in 2009. It is a complementary team that sees Richard and Sam lead all aspects on the business side, including commercial development and strategic direction, while Toby and Tim have responsibility for music policy and creative output.

As the music industry sees traditional revenue streams decreasing, LoveLive is actively creating new and incremental income opportunities for music artists and record labels by bringing them together with brands and broadcasters on innovative, credible and mutually beneficial projects. The company boasts unrivalled access to music rights and artists through its unique relationships and agreements with the major music labels: EMI, Universal, Warner Music Group and Sony Music Entertainment; as well as a host of smaller and independent labels, and owns the largest independent live video catalogue in Europe with all rights cleared for distribution to TV, web and mobile devices.

In 2011 LoveLive shot over 450 Live performances including the Global album launch of Adele, produced industry first Pay Per View events for Florence + The Machine and PJ Harvey, created the McFly On The Wall TV format for Channel 5, co-produced and developed The Black Cab Sessions USA, aired the fifth season of Rockfeedback Presents on Channel 4, delivered Ford’s innovative Bands In Transit campaign, produced the Robert Plant documentary for HD Net and added a number of brand partners to its portfolio.
http://www.lovelive.tv.


About YouTube
YouTube is the world's most popular online video community allowing millions of people to discover, watch and share originally created videos. Our mission is for YOU to discover and shape the world through video. YouTube provides a forum for people to connect, inform and inspire others across the globe and acts as a distribution platform for original content creators and advertisers large and small. YouTube, LLC is based in San Bruno, CA and is a subsidiary of Google Inc.


About ‘JAY Z’s Life + Times’
Conceived and curated by Shawn “JAY Z” Carter, ‘JAY Z’s Life+Times’ is a testament to its name, an online destination that features in depth lifestyle pieces on an array of subjects. The first of its kind, it is a content-rich hub that seamlessly blends the interests of JAY Z with those of his fanbase, listeners, and those whose interests lie in a similar lifestyle. From burgeoning musicians to fashion luminaries, design houses, sports icons, automotive firms and more, JAY Z’s LifeandTimes.com is an editorially driven digital platform that provides a succinct insider?s perspective on the world's most influential people, places and products through both its website LifeandTimes.com and its Original Content Channel, youtube.com/JAYZsLifeandTimes.