Bergdorf Goodman Unveils the Holiday Windows and the 2012 Holiday Experience 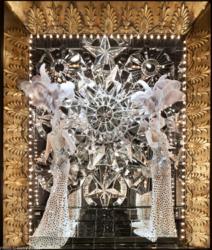 The Mirror Kaleidoscope is the Grand Finale of the BG Follies of 2012. Twin showgirls are presented downstage, while a colossal, rotating, mirrored starburst rotates behind them.

The holiday windows at Bergdorf Goodman, a true New York spectacle, continue their renowned tradition of high fantasy, dramatic surprises, extraordinary fashion, and captivating storytelling. The 2012 windows, entitled “BG Follies of 2012,” are inspired by the lavish performances of American popular entertainment of the 1920’s and 30’s-- the Jazz Age. The windows evoke the glorious era of Art Deco theater palaces re-creating the sumptuous atmosphere of the Ziegfeld Follies, the verve of Busby Berkeley’s Hollywood musicals, and the bounce of Vaudeville revues. David Hoey, Senior Director of Visual Presentation and his team devote an entire year to the production of the holiday windows. The windows will officially unveil on Monday, November 19th with one preview window Friday, November 16th. They will remain on display through Thursday, January 3, 2013.

The curtains rise on each of the five main Fifth Avenue windows revealing various performers framed by gold-leafed prosceniums.

ACT I: "Tuning Up" is inspired by the all-girl orchestra craze of the 1920s, later immortalized in the Billy Wilder film "Some Like It Hot." Installed in aerial perspective, the stylish orchestra is set upon an elaborate black and white checkered ballroom floor. The individual musicians wear black, white, and metallic dresses by Marc Jacobs, Phillip Lim, Elie Saab and others. The group of six performs on piano, drums, and a variety of silver-plated musical instruments, while keeping an eye on their audience strolling along Fifth Avenue.

ACT II: "Rhapsody in Feathers" is set in an environment created entirely out of millions of white feathers. The Art Deco-patterned backdrop is a hand-crafted mosaic of feathers, while a sextet of stylized white-feathered birds and peacocks add drama. The atmosphere is soft, ultra elegant, and extravagant, with a hint of Minsky's Burlesque. The window features a mannequin inspired by the famous early 20th century fan dancer, Sally Rand. The mannequin, flanked by two oversized, Art Deco chandeliers, poses with her large feather fans while wearing a short white fringed dress by Marchesa.

ACT III: "Follies in Miniature" features two dozen showgirls preparing to take their places for curtain call, but there's a twist; the showgirls are a collection of authentic antique 1940s miniature mannequins. These models, ranging in height from 12 to 48 inches, have been transformed by Bergdorf Goodman into miniature replicas of Ziegfeld Follies showgirls from the 20s. They are dressed in elaborate gold, lace, and metallic custom-made gowns and headdresses. They perch on their own tiny stages, framed by gold-leafed prosceniums and exquisite miniature scenery. A life-sized showgirl, dressed in a gown by Lorena Sarbu, shares the stage.

ACT IV: "Canine Daredevils" sets the stage for a surprising novelty act: a glamorous dog trainer surrounded by 30 stylized, performing poodles and terriers. The custom-designed plaster dogs perform tricks on a sculptural, silver and gold-leafed Art Deco contraption set against a red velvet curtain. Some dogs entertain on wheels and platforms, while others charm the viewers on bicycles and ladders. The mannequin commands her canine show-offs in a dress from the Alexander McQueen Spring 2013 Runway collection.

ACT V: "The Mirror Kaleidoscope" is the Grand Finale of the BG Follies of 2012. Twin showgirls are presented downstage, while a colossal, rotating, mirrored starburst rotates behind them. The multiple layers of this starburst contain nearly one thousand individual beveled mirrors. Each successive layer of the starburst rotates in an opposite direction from the layer behind, creating an extraordinary kaleidoscopic effect. The mannequins' matching gowns, studded in mirrors and rhinestones, were specially commissioned from Naeem Khan.

The ACTS continue along 57th Street, 58th Street and across Fifth Avenue in front of the Men’s Store.

In addition to the spectacular windows, this holiday season Bergdorf Goodman has created several special and unique initiatives.

Bergdorf Goodman has partnered with TheCoveteur.com, the on-line fashion and retail website, to create an exclusive behind the scenes photo series and video about the making of the Holiday windows. Viewers are given an intimate view into the fantastical world of the Bergdorf Goodman visual team where they will gain access into their various studios for a glance at the teams’ old world craftsmanship. The series releases online on BG.com, 5th/58th and TheCoveteur.com on November 21st.

In conjunction with the photo series, Bergdorf’s is having a #BGWindows Instagram contest, which begins November 20th; photograph a window for a chance to win a miniature mannequin from the memorable windows or a printed photo by TheCoveteur.com. Submissions can be viewed on Bergdorf Goodman’s Facebook page and winners will be announced on or about January 7 and will be notified by Instagram.

This year is the first ever Bergdorf Goodman Holiday Window Audio Tour, narrated by Bergdorf’s own David Hoey, who describes in great detail each of the five main Fifth Avenue windows, viewers will be able to access this via a QR code.

A QR code is also found in this year’s Holiday Gift Book. By scanning the code, readers can access a mobile gift wish list that they can share with friends and family. Pinterest will feature exclusive Holiday content and gift-giving ideas throughout the season and the Holiday spirit will continue on BG.com, 5th/58th, Facebook, Twitter and Google+ with gift-giving tips, holiday to-do’s and window images.

The Holiday season is in full swing on the Seventh Floor with the following activities:

Warm up and recharge in Goodman’s Café on the Beauty Level for complimentary cookies, hot cider and phone charging stations. Visit the Men’s Store, to shop and enjoy holiday tunes from the jazz trio, The Blue Vipers.

The holiday windows along with all Bergdorf Goodman holiday endeavors can be enjoyed by everyone when they visit BG.com and 5th/58th.

ABOUT BERGDORF GOODMAN
Bergdorf Goodman, founded by master tailors Edwin Goodman and Herman Bergdorf, is located on the corner of New York’s Fifth Avenue and 58th Street, the former site of the Cornelius Vanderbilt mansion. Bergdorf Goodman: The pinnacle of style, service, and imagination, since 1901.