Andrew Hawley from Vintage Rock Posters, a serious buyer of original 1950's and 1960's Fillmore style concert posters, announces his search for original Jimi Hendrix Experience 1968 Sacramento State Concert Posters. The concert was organized by a bunch of ambitious college kids trying to make the most of a college facility and have some fun. 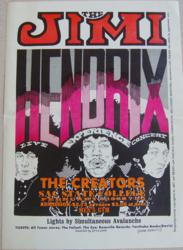 Andrew Hawley from Vintage Rock Posters announces his search for original Jimi Hendrix Experience 1968 Sacramento State Concert Posters. The concert was held on February 8, 1968 at the Men’s Gym at Sacramento State College. According to Hawley, “This concert was early in Hendrix’s short career and before big business took over the rock concert promotion business. The Sacramento State College Hendrix concert was organized by a group of college students trying to take advantage of campus college gym to host on a big name 1960s rock star. They pulled it off, packed the gym and watch on of the greatest guitar players put on a great show.”

Hawley continues, “Local artist Jim Ford and Art Print designed the Hendrix poster and produced concert posters for shows done in the Sacramento area by Jim Morrison and The Doors, Janis Joplin, The Cream and Grateful Dead. The poster measures approximately 15x22 inches and features a great artistic rendering of the Hendrix Experience in very vibrant colors. Ford’s artwork is very unique and was used only for the Sacramento gig. Hendrix would come back to play Sacramento two years later far after the Experience had broken up.”