Imagine a society where vigilantism is the latest craze; how far would you be willing to go for what you believe in? This is the moral question raised by Melbourne based game developers Divisive Media with the release of Vigilante: Speak for the Dead on the iTunes App Store. 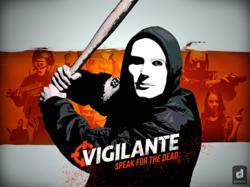 Vigilante: Speak for the Dead

Both the game and the film were created together and designed to tell a distinctly different side of the story. The two are deeply intertwined, but they tell the story in very different ways.

Vigilante: Speak for the Dead is a free social game designed to introduce players to the world of the controversial film John Doe (scheduled for release early next year.) Film Victoria, who supported both the film and the game, embraced it as the largest transmedia campaign ever launched for an independent film. “This project breaks new ground,” says Divisive CEO Chris Ferriter. “Both the game and the film were created together and designed to tell a distinctly different side of the story. The two are deeply intertwined, but they tell the story in very different ways.“ Developed locally in Melbourne, Vigilante: Speak for the Dead is being released exclusively to the Australian Market before its international release. This exclusivity and ‘leg up’ on the competition is the team’s way of thanking their beta testers and Australian film and game industry for supporting this innovative project.

Vigilante stands alone as an example of what independent content creators can accomplish in an era of digital distribution. For the first time, film producers and game developers worked in unison to establish a universe that engages users with unique content across multiple platforms creating alternate revenue streams and marketing outlets through the use of social media rather than working within the confines of the studio system. Speak for the Dead is not just a trumped up advertisement for the John Doe film but one of the smartest social networking games available offering an experience far exceeding popular ‘social’ games. In describing the player experience within the game, Divisive Media Creative Director Trent Kusters states "In Vigilante: Speak for the Dead the players control the politics. It’s the social mechanisms of the game… the way players choose to interact with each other, that drives the entire game. Who's attacking who, who has or hasn't joined an encounter, who's the new member of this crew? It's not token social interaction, players form strong alliances and lasting enemies."

Start by creating a custom avatar using a photo-realistic law enforcement style character generation system and investigate events taking place around an ever-changing city. Choose to initiate encounters against other players or NPCs based on your investigation and dish out your own brand of justice! Some actions can bring on unwanted attention from Police, the Speak for the Dead movement, or rival factions, so choose wisely! Players won’t last on your own. Form a crew of up to 100 players, create a crew patch, manifesto and start recruiting other players to spread the influence. With one of the first in-game chat mechanisms offered in a mobile RPG, you can strategize with crew members to gain the upper hand. There is strength in numbers; however, having the largest crew doesn’t make it untouchable. The right balance of vehicles, weapons, intel and strategy can take down the toughest of opponents!

Divisive Media is a boutique game development studio based in Melbourne Australia. Founded in 2011 by film and game industry veterans with a belief that the non-linear, interactive nature of games could be used to expand upon the storylines of film in a way that created unprecedented viewer engagement for the license. Their first project, Vigilante: Speak for the Dead is a massively multiplayer social strategy game that introduces players to the world detailed in the upcoming film John Doe, starring Battlestar Galactica alumni Jamie Bamber.