The Truth About Alcohol Can Save Young Lives 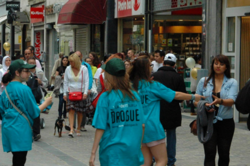 That is why it is so important for them to read The Truth About Alcohol. I’m sure these two boys would never have come so close to poisoning themselves with alcohol if they had known that was possible. Kids simply don’t know.

“Say No to Drugs” volunteers from the Churches of Scientology of Europe in Brussels were quick to respond when they learned two children, ages 10 and 11, were hospitalized from alcohol-induced comas.

Although the Scientologists had never met these two boys, news of what occurred prompted the volunteers to mobilize to educate youths about the dangers of alcohol and binge drinking. They handed out more than a thousand copies of The Truth About Alcohol and other drug education booklets to residents of the nearby town of Braine-l’Alleud where the incident took place.

“Children who binge drink don’t know what they are getting into,” says Agnes Bron, coordinator of the local Say No To Drugs initiative and Public Affairs Director of the Church. “That is why it is so important for them to read The Truth About Alcohol. I’m sure these two boys would never have come so close to poisoning themselves with alcohol if they had known that was possible. Kids simply don’t know.”

The Truth About Alcohol is part of the Truth About Drugs series of booklets—13 in all—covering the most commonly abused drugs. Those reading the booklet quickly learn what these boys never knew until it was almost too late: “Alcohol overdose causes… severe depressant effects (inability to feel pain, toxicity where the body vomits the poison, and finally unconsciousness or, worse, coma or death from severe toxic overdose).”

Local residents and merchants were eager to receive copies of the booklets and pass them along to parents and children in the community. One parent sought out the volunteers to thank them and get the booklet for her child—a classmate of the two boys who nearly died.

The Church of Scientology has published a new brochure, Scientology: How We Help—The Truth About Drugs, Creating a Drug-Free World, to meet requests for more information about its drug education and prevention initiative. To learn more or read a copy of the brochure, visit the Scientology website.

The Church of Scientology supports one of the world’s largest nongovernmental drug education and prevention campaigns. It has been conclusively proven that when young people are provided with the truth about drugs—factual information on what drugs are and what they do—usage rates drop commensurately.

Displays of The Truth About Drugs booklet are placed in shops, making them available to customers.