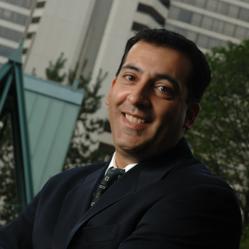 (Financial Press) - Paul Gill pulls up a map of the drill holes at his company’s flake graphite exploration project in Quebec and points excitedly to a cluster of tiny red dots, meanwhile rattling off the numbers.

“The analysts are going to have to readjust their calculations as to the value of this project,” says Gill, CEO of Lomiko Metals Inc.

“I think we’ve just shot it through the roof.”

The Vancouver-based executive is elaborating on the release in November of results from 17 of 23 drill holes completed at the company’s 3,700-hectare Quatre Milles property.

“We had a difficult time finding which highlights to pick, because there are so many interceptions in those 23 holes,” says Gill. “We picked the top eight or nine that are standouts.”

The conclusion Gill draws is that Quatre Milles is looking more and more like a “viable mining prospect” that “bodes well for the concept of a near-surface, open pit scenario.”
It’s early days yet.

What the results show beyond doubt is that there is high-grade flake graphite mineralization on the property, that much of it is contained within a “minable width,” and that the mineralization starts at the surface, making for easy access and lower costs.

But Phase 1 of the drilling program has probed only a very limited area of the property and it’s too soon to judge the entire extent of the potential resource.

“Looking at the (results from) 23 holes, it’s certainly a very good indicator that there is continual mineralization throughout this entire body,” says Gill.

“The theory before was that there were separate, high-grade graphite beds along a strike corridor of 1.1 kms.

With Phase 1 “in the bag,” Lomiko’s proposed next step is to do a further 50 drill holes to try to determine the outer limits of mineralization, and then come up with a cross section.
For that, it needs more money.

Says Gill: “We would like to raise at least $1.5 million, because in addition to the drilling there are administration costs. And we would need metallurgical studies to get us close to opening the door to a pre-economic assessment.

“If we can get financing by the end of the year — which is not impossible —we could start the new drilling by January.”

With flake graphite in growing demand around the world, Gill is confident the money will be raised.

Prices for flake graphite have more than doubled over the past several years and have reached as high as $3,000 per tonne before a healthy correction.

It is expected that prices will continue to rise as traditional sources change. China, which produces 80 percent of the world’s graphite, has slashed exports as it moves to create a state monopoly.

Gill estimates that production at Quatre Milles is still two or three years away: “But that’s when graphite prices really will be hitting another high.”

The CEO says that Plan A is for Lomiko eventually to bring in mining expertise and attract money to take the mine into operation. An alternative would be to bring in a joint venture partner or, failing that, fashion Lomiko into a take-over target.

Other elements for a successful enterprise, apart from the ore itself, are in place.
The property is on provincial land, with good road access, but without cottages or local residences. It’s mostly flat, with access to water, but isolated on a peninsula. There’s very little overburden — “maybe five to 15 metres of waste material, which is not a whole lot in a mining situation.”

In Gill’s mind, these are all keys to reaching what he calls an “early payback scenario — it’s a question of how quickly you can start earning revenue to pay down your capital expenditure.”
“The pockets of high-grade we have already discovered close to the surface are sufficient to start a mining operation,” he says. “One to three million tonnes of 6+ percent graphite is minable, without anything else. That would be a four or five-year mine.”

If it transpires that the total resource is significantly larger than currently suspected, revenue from the easily reached high-grade ore could support the extraction of less accessible, lower-grade deposits.

“Our global potential here is up to 40 million tonnes of 2.5 percent mineralization of flake graphite. That’s similar to the early stages of Northern Graphite, which now trades at 70 cents with a market cap of $50 million and is setting the standard in the industry.”

Lomiko Metals, with a market cap of $2.7 million, is currently trading at around five cents a share.
Gill says such comparisons make Quatre Milles a project that is “definitely worth pursuing” by funders and other interested parties.

Legal Disclaimer/Disclosure: A fee has been paid for the production and distribution of this Report. This document is not and should not be construed as an offer to sell or the solicitation of an offer to purchase or subscribe for any investment. No information in this article should be construed as individualized investment advice. A licensed financial advisor should be consulted prior to making any investment decision. Financial Press makes no guarantee, representation or warranty and accepts no responsibility or liability as to its accuracy or completeness. Expressions of opinion are those of the author’s only and are subject to change without notice. Financial Press assumes no warranty, liability or guarantee for the current relevance, correctness or completeness of any information provided within this article and will not be held liable for the consequence of reliance upon any opinion or statement contained herein or any omission. Furthermore, we assume no liability for any direct or indirect loss or damage or, in particular, for lost profit, which you may incur as a result of the use and existence of the information, provided within this article.