The Indie Game Magazine has announced the nominees to its annual readers’ choice awards and has a brand new issue on sale. Vote for the best indie games to choose the IGM Game of the Year winners for 2012. Gamers can vote on their favorites now through the end of 2012 and can win free games and other prizes. 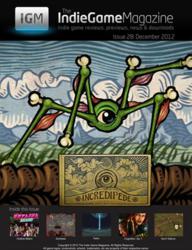 The Indie Game Magazine (http://www.indiegamemag.com), the premier source of independent gaming news, reviews and culture, has just announced the nominees to its annual readers choice awards along with releasing its 28th issue. Vote for the best indie games to choose the IGM Game of the Year winners for 2012.

Gamers can vote on their favorite indie games online to help decide the winners of this year’s IGM Game of the Year Awards. Anyone who votes can also opt-in to be eligible for prizes that will include IGM subscriptions, free games, and more. Anyone can vote by visiting http://www.indiegamemag.com/igm-awards-2012-vote/

In Issue 28 of IGM, we talk to Colin Northway about his trips across the globe and his brand new game Incredipede. Read reviews of not only Incredipede but also Kairo, Cognition, and the IGM Award nominated Zombies and Hotline Miami. Other articles include coverage of Fly'N, Sui Genesis, Lone Survivor, a Design analysis of Tower Defense and more. Grab it now at http://www.indiegamemag.com/issue28/

IGM is available for single purchase as well as via subscription in both print and digital formats, as well as the iPhone and iPad. Our recently updated iPhone app is only $0.99 and features newsstand integration, embedded videos featuring indie game reviews, developer interviews and more. Check it out in the App Store: http://www.bit.ly/igmappns

If you’re an Android user, check out our Zinio subscription and App: http://www.zinio.com/indiegamemag/

ABOUT IGM:
Indie Game Magazine (http://www.indiegamemag.com) is the premier source of news and culture for the independent gaming. Started in October 2008 and published bi-monthly by Mike Gnade, IGM has matured into a definitive voice for the indie gaming scene. Combining no-nonsense reviews, in-depth reviews and long-form features with the leading lights of the industry, the magazine, like the games it covers, is independently owned and fiercely independent as it strives to highlight the artists and community behind what it deems the most creative branch of the video gaming universe.