Tamils for Obama to Obama: Congratulations, and We Helped

Tamils for Obama, a politically active group of Tamil Americans, wrote a letter to newly-re-elected President Obama at the White House congratulating him on his election victory and pointing out the things that Tamils for Obama and some of their Tamil friends did to help him achieve this victory. 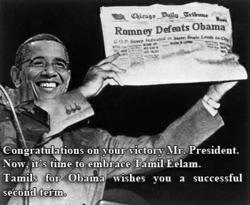 Congratulations on your victory Mr. President

We hope to see an independent Tamil homeland--Tamil Eelam--emerge in northeastern Sri Lanka. We hope that you and your next secretary of state will have an active part in helping Tamil Eelam to be born.

The Tamil organization said in a letter to President Obama at the White House that they were gratified with his re-election and that, since they had worked for it, they considered partly their own victory.

“In our letter we mentioned some of the things we did to help President Obama win re-election,” said the spokesman. “Most of our activity was in the so-called battleground states. These are the states that can go either way in a national election, and so these are the states that are likely to bring victory to one side or the other. Both campaigns focused most of their efforts on these swing states, as we did.

“Here is what we told President Obama we did for his re-election,” the spokesman went on. “Here is a list of what we wrote in our letter:

“We then told to the president what we hope to see in his next four years. We wrote ‘We hope to see an independent Tamil homeland--Tamil Eelam--merge in northeastern Sri Lanka. We hope that you and your next secretary of state will have an active part in helping Tamil Eelam to be born.’”

To see the letter to President Obama, go to:
http://www.tamilsforobama.com/letters/congratulations_mr_President_2012.html

Tamils for Obama is a politically active group of Tamil Americans. We supported Hillary Clinton and then Barack Obama in the Democratic primary and US general election in 2008. We believe that over 70,000 Tamil civilians were massacred during the last weeks of the Sri Lankan civil war. We have watched the behavior of the Sri Lankan Singhalese victors after the war, and we strongly conclude that Tamils in Sri Lanka will only be safe when this unfortunate island is divided into two states.