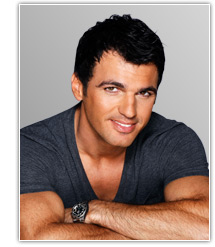 “Pain really changes who you are,” said Dovolani “although we put on a smile on Dancing with the Stars, a lot of times we are smiling through the pain. I could never have won this season without Omega XL"

After pulling his back last week and exhibiting some stiffness in the semifinals, Tony Dovolani turned to Omega XL, an all natural anti-inflammatory omega 3, to power through the All-Star Finale and win season 15 of Dancing With The Stars. Dovolani and his partner, former Dallas Cowboys cheerleader Melissa Rycroft, put together a winning routine for what was considered their Achilles heel - the freestyle. Rycroft’s effortless ability, and Dovolani’s world champion moves allowed them to defy the odds to beat out two former champions in the semifinals and ultimately win the Mirror Ball trophy on last night’s star studded finale.

Tony has been dancing since he was three years of age. Now, at 39, it would be impossible to imagine he wouldn’t be experiencing more than a few aches and pains. Earlier this year, Tony became a Global Ambassador to the Omega XL brand after he experienced significant joint pain relief by using the high potency omega 3 complex. Last week when he pulled his back, and the win was seemingly put in jeopardy, Tony wasn’t worried “I’ve been taking Omega XL daily for the better part of a year” said Dovolani “and when I injured myself, which happens in dance frequently, I just take a few more. Omega XL is all natural, and highly effective so I knew I’d be fine.” By relieving his inflammation, he was able to dance pain free, and ended up dancing his way to the championship.

“Pain really changes who you are,” said Dovolani “although we put on a smile on Dancing with the Stars, a lot of times we are smiling through the pain. I could never have won this season without Omega XL, it is something that I want to share with as many people as possible.”
As brand ambassador for Omega XL, Dovolani will continue to appear on TV sharing his experience with Omega XL.

“We are thrilled for Tony and Melissa” stated Ken Meares, CEO and Founder of Great HealthWorks, the makers of Omega XL. “Omega XL has been providing all natural pain relief to thousands of our customers for years and we are pleased that Tony was able to find the relief from his pain to power his way to become the all-star champion of Dancing with the Stars. We look forward to working with Tony as we continue to spread the word of the benefits of Omega XL, a one of a kind, patented all natural pain relief product” concluded Meares.