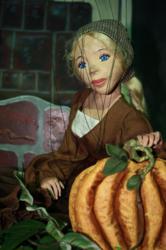 "Nashville Public Library has a great 75-year tradition of puppetry which began by Tom Tichenor and our job is to keep it alive and growing," stated Brian Hull, manager of Wishing Chair Productions. "The opportunity we have been given is tremendous, and the possibilities we have found are endless."

Hull explained how the community embraces the puppet program as the fan base continues to grow. More than 600 were in attendance for Cinderella last weekend.

For more information on the Wishing Chair Productions and other library events, visit http://www.library.nashville.org.

About Wishing Chair Productions
Wishing Chair Productions continues the tradition of sophisticated puppet storytelling which began in 1938 by legendary Nashville puppeteer Tom Tichenor. Wishing Chair offers weekly programs from interactive storytimes to full-scale puppet productions.There is also a puppet truck that travels throughout the community to schools, day cares, festivals and the children’s hospital. All of the productions are original from script to soundtrack to production and performance and as always are free.