Deborah Alvarez-Rodriguez says she has accomplished all she set out to do as she built a culturally diverse team and doubled revenue during hard economic times. 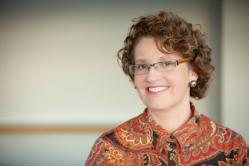 Deborah’s commitment and work with Goodwill has dramatically improved the organization’s stability, effectiveness and sustainability. She has greatly strengthened us and positioned Goodwill as a highly effective social enterprise.

The Board of Directors of Goodwill Industries of San Francisco, San Mateo and Marin Counties, Inc. today announced the resignation of President and Chief Executive Officer Deborah Alvarez-Rodriguez. Ms. Alvarez-Rodriguez will remain in her position until December 31, 2012 while the organization begins the search for a replacement.

“For nearly nine years I have had the honor of leading this great organization and its more than 700 culturally diverse employees. Together with our community partners and donors we have helped over one million shoppers and participants to new levels of sustainability, innovation and community impact,” said Ms. Alvarez-Rodriguez. “I am proud of how far we have come. As Goodwill recruits its next leader and prepares to celebrate its 100 Year Anniversary – I am excited about our future.”

“Deborah’s commitment and work with Goodwill has dramatically improved the organization’s stability, effectiveness and sustainability. She has greatly strengthened us and positioned Goodwill as a highly effective social enterprise,” said Board Chair Jane Vaughan. “The Board hired Deborah to ready the organization for the next century and we are confident Goodwill is perfectly positioned for the future.”

Alvarez-Rodriguez is named “The Most Admired Nonprofit CEO” by San Francisco Business Times. Goodwill’s accomplishments since 2004 include:

“We are grateful for her dedication and service, and for advancing our mission – We Create Solutions to Poverty Though the Business We Operate – and our four core values of courage, possibility, community and integrity,” said Goodwill’s Board of Directors.

According to Board Chairperson Vaughan, Goodwill’s Chief Financial and Operating Officer, Gary Grellman, a San Francisco native who grew up in San Mateo County, and University of California Santa Barbara alum, will serve as the interim CEO. A transition team as well as a CEO search committee are in place and have begun the work of finding Goodwill’s next great leader.

Community partners, donors, participants, city officials and the public are invited to attend a community celebration for Alvarez-Rodriguez that will be held at 3:30pm on December 20 at the San Francisco downtown facility, 1500 Mission Street. RSVP’s are necessary. Call Andrea McHenry at (415) 575-2169.

Statistics only tell part of the story, but our impact is clear. In 2011 Goodwill employed 882 people in our nonprofit social enterprises and placed another 529 people in local jobs outside of Goodwill. The economic impact generated by these jobs infused more that $17 million into the California economy. The taxes generated by Goodwill employees alone provided over $2 million in needed public revenue.