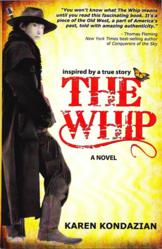 The USA Book News Awards is now in its tenth year and receives a wide array of entries, from mainstream and independent publishers.

THE WHIP is inspired by the true story of a woman, Charlotte "Charley" Parkhurst (1812-1879) who lived most of her extraordinary life as a man in the old west. She became a renowned stagecoach driver for Wells Fargo. She also was the first known woman to vote in America (1868) disguised as a man. Her grave lies in Watsonville, California in the Pioneer Odd Fellows Cemetery.

THE WHIP is Karen Kondazian's debut novel. She is an award-winning theater actress, has starred in over 50 television shows and films, and played Kate Holiday in the TV movie, The Shootout at the OK Corral.

THE WHIP is published by Hansen Publishing Group and is available in print format, and also as an E-book and Audio Book.

The print book can be ordered online from Amazon, Barnes & Noble and local independent bookstores. The E-book version of THE WHIP is available for Kindle, the Nook and for the iPad. The newly released Audio book, read by Robin Weigert (Calamity Jane in HBO's Deadwood) can be found at Amazon and Audible.com/TheWhip.

Karen Kondazian's acting career began at the age of eight when she was chosen to be one of the infamous children on Art Linkletter’s Kids Say the Darndest Things. The opportunity to miss school during tapings was all it took for Karen to focus on acting.

She is well known for her theater work, particularly in playing the women of Tennessee Williams. In 1978-79 she played Serafina in The Rose Tattoo at the Beverly Hills Playhouse, a performance that won her the Los Angeles Drama Critics Circle Award for Best Actress (1979). Williams, after seeing the production, was quoted in Gardner McKay's Los Angeles Herald-Examiner article (February 6, 1979) thanking Kondazian for her "staggeringly beautiful performance." Kondazian and Williams became friends -- he eventually giving her permission to produce any of his plays in his lifetime. Kondazian went on to play many of Williams' roles... one of her favorites, starring opposite Ed Harris in Sweet Bird of Youth.

Her work extended to the big and small screens, primarily throughout the 1980s and 1990s. In 1982 she appeared as a series regular lead in CBS’s Shannon . Kondazian has guest starred in over 50 television shows and films including TNT’s James Dean with James Franco, dir. Mark Rydell) She is a lifetime member of The Actors Studio and a member of the Academy of Television Arts and Sciences.

She is the author of best-selling book The Actors Encyclopedia of Casting Directors, Random House (2000). The book is a compilation of her column interviews Sculpting Your Own Career and The Actor’s Way, featured in Back Stage Magazine / Drama-Logue. It includes interviews with James Cameron, John Woo, Richard Dreyfuss and over 100 casting directors.

The Whip was featured on the cover of the March 26th, 2012 issue of Publishers Weekly.

Karen Kondazian discussing The Whip (on a stagecoach with NPR’s Peter Robinson at the Wells Fargo Museum in San Francisco):
http://www.youtube.com/watch?v=VlMr48tm0dU