At the Association of Professional Engineers and Geoscientists of New Brunswick's next annual meeting in Fredericton, New Brunswick, Canada James O’Kon will be speaking about his research on the technology of the ancient Maya Civilization. 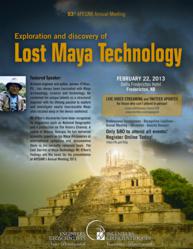 It is always an honor to get to address a group of Professional Engineers.

The Association of Professional Engineers and Geoscientists of New Brunswick has asked engineer James O’Kon to be the Featured Speaker for its 93rd Annual Meeting. O’Kon has many years experience as an engineer and has received awards from organizations such as the American Society of Civil Engineers (ASCE), American Consulting Engineers Council, United States Air Force Design Award, American Institute of Steel Construction. In addition to his time spent on projects including the Roosevelt Island Tram in New York City and the Anti-Submarine Warfare Maintenance and Training Facility in Jacksonville, FL, James O’Kon has pursued a lifelong passion for the engineering, sciences and technology of the Maya.

In his role as an archaeo-engineer O'Kon has combined his unique professional engineering experience with the search for lost Maya technology. After years of collecting field data, obtained by traveling in dugout canoes, hacking his way through the jungle and sleeping in tents, he was able to use his forensic engineering skills, along with modern digital tools, to reveal the mysteries of lost Maya technology.