Superior Venture Corp. has appointed Brian Hammond as its President, CEO and a Director of the Board. 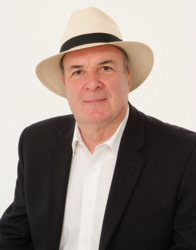 Superior Venture Corp. ("Superior" or “the Company”) (OTCQB:SVEN) has appointed Brian Hammond as its President, CEO and a Director Of The Board.
Mr. Hammond will be guiding the Company’s development of projects that it is pursuing with major Chinese film studios through Ilustrato Pictures. His experience in co-development and international film production will be instrumental to the strategic deal flow for the Company.

Brian Hammond is a veteran film executive with a long history of film development and studio guidance spanning over 30 years in the North American film marketplace. He is also a head of the Company’s wholly owned subsidiary, Ilustrato Pictures, which he co-founded.

As an original founder of Northwest FX, in the late eighties, Mr. Hammond left and created Pilot-West Productions. PWP was involved in the first inter-active learning on laser disc and eventually the web. That company was responsible for numerous special broadcasts for sports, special events and news (CTV Sports, Yeltsin-Clinton conference for WABC, Ironman Triathlon, World Ski Events) offering crews, camera and editing packages and production services. PWP became the largest Avid off line rental house in Western Canada, providing off line systems and postproduction services to a broad North American client base including Showtime, HBO, Crescent Productions and Warner Bros., among others. Mr. Hammond also directed and produced a number of award winning commercials for numerous clients such as Nabob, the Egg Marketing Board, Manitoba Hydro, Kellogg's, Ford, Acura, Lexus, HSBC and others.

In 1999, Pilot-West Productions offered full post-production services and visual effects for television and film under the name of Post-Digital Works. Since June 2000, Mr. Hammond has been working in HD, delivering series and movies to the Discovery Channel, and NHK Japan on a constant basis. In the past seven years, he was involved with Digital I/O for film deliveries and visual effect companies completing over 25 movies.

In December 2004, Brian Hammond and his team founded Shaman Digital Media, built around Avid DS/HD, a complete finishing non-linear system used for number of television series and dramas. In August of 2007, they expanded their facility with the integration of Auto-Desk Lustre and Smoke coupled with the move to a new 11,000 square foot facility, which included digital effects.

Mr. Hammond has consistently been involved in educational and promotional media such "Get Set " and "Go", an interactive program for Premier/School Specialty. He has also produced a number of training and marketing videos for HSBC, Shoppers Drug Mart, IBM, and Xerox, among others.
The long list of production and development credits over Mr. Hammond’s career include feature film projects, independent productions, entertainment television and commercials.

About Ilustrato Pictures Ltd.
Ilustrato Pictures Ltd. is an international motion picture development and production company seeking to co-create feature film projects with Chinese film companies. All of its projects are financed, produced and distributed in partnership with domestic Chinese companies. Ilustrato Pictures has developed extensive infrastructure and distribution networks in China –the fastest growing and most dynamic movie market in the world.
For more information see http://www.superiorventurecorp.com
Contact:
Investor Relations
Tel: +44 (0) 207 543 7720
###