A New Approach to Helping Self-Published Authors Break Through the 1.5 Million Books Published Each Year

Over 1.5 million books have been published annually for the last few years, about 1.2 million from nontraditional publishers, such as self-published books, and the average self-published sells 75 copies. A key reason for the small number is that many self-published authors don’t write very good books or don’t know how to promote them through the traditional or social media, but author Gini Graham Scott, who has published over 50 books with mainstream publishers and 30 books through her company Changemakers Publishing and Writing, helps writers change those daunting odds through her comprehensive “publishology” approach, which, includes creating book trailers, writing articles, and setting up speaking engagements to draw attention to a book. 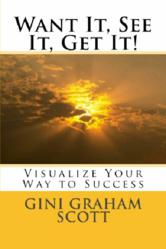 Want It, See It, Get It! book by Gini Graham Scott

To successfully self-publish a book today it is necessary to create a comprehensive publishing and promotional campaign.

The odds of publishing a successful book may seem daunting, since publishers today are seeking writers who are already celebrities or have a high profile platform. But increasingly, with the fast inexpensive technologies for publishing books, a growing number of writers are self-publishing their books – about 1.2 million out of the approximately 1.5 million books published in both 2011 and 2012, according to Bowker Market Research, (http://www.cig.com/category/bowker) But the average self-published book sells only 75 copies, despite some notable big successes.

In response, author Gini Graham Scott has found ways to change that average both for her own books and for clients through some creative strategies called “publishology” that draw attention to these books. For example, she has done this for WANT IT, SEE IT, GET IT! VISUALIZE YOUR WAY TO SUCCESS, which has sold over 3000 copies, since it was first published by AMACOM and is now published by Changemakers Publishing. She created a series of videos with excerpts of chapters, http://www.ginigrahamscott.com/page2.html, wrote a series of articles based on techniques described in the book, did a blast to radio talk show hosts and producers, so she was a frequent guest. She also set up a website for her books about improving work relationships at http://www.workwithgini.com and created a series of online training programs and face-to-face workshops. She even created a WANT IT, SEE IT, GET IT! game, and the book has been published in several language, including most recent Thai. In another case, she launched A SURVIVAL GUIDE TO WORKING WITH BAD BOSSES, published by AMACOM, with a bad bosses party featuring a series of bad boss games that had over 200 attendees, and a Bad Bosses website, http://www.badbosses.net.

Through her business Changemakers Publishing and Writing (http://www.changemakerspublishingandwriting.com), she helps clients achieve the same success by first acting as a ghostwriter or creative consultant, because one key to success is to start with her comprehensive approach that starts with a good well-written book. Then, she helps clients strategize their best approach, which might include creating a book trailer, developing a series of articles and blogs from the book, creating a book website, and using the social media or events to spread the word.

Most recently, Gini has launched her own multi-faceted campaign for her latest book: LIVING IN LIMBO: FROM THE END TO NEW BEGINNINGS, based on her experience in surviving a near foreclosure, selling her Oakland house, and moving to a rental in San Francisco. Among other things, she created a series of music videos, including the Bad Bad Banks song and several mini-documentaries on the Middle Class Homeless http://www.youtube.com/watch?v=TBi-PC0xg-k to call attention to the plight of the over 12 million middle class homeowners with underwater homes or facing foreclosure. She also set up a website dedicated to the foreclosure crisis at http://www.saveyourhouseandmoney.com, and has gained awareness by donating the book to charitable events and getting endorsements and postings on blogs from real estate agents and the officers of charitable groups.

Gini is the founder of Changemakers Publishing and Writing (http://www.changemakerspublishingandwriting.com) and the author of over 50 published books. She received a Ph.D. in Sociology from the University of California in Berkeley, a J.D. from the University of San Francisco Law School, and M.A.s in Anthropology, Mass Communications and Organizational/Consumer/Audience Behavior and Popular Culture and Lifestyles at California State University, East Bay. She is getting an additional MS in Recreation and Tourism in 2013 and writing her final thesis on finding funds for independent films, which will be published by Hal Leonard. She has spoken about the topics of her books to many groups and the media, including appearances on Good Morning America, Oprah, and CNN.

Living in Limbo: From the End to New BeginningsThe book features Gini's story from the banks reducing her credit to going through the foreclosure process, selling her home, and turning her life around in a rental in San Francisco