Noyo Spanish for Debuts in Android Market with 100% Satisfaction Guarantee 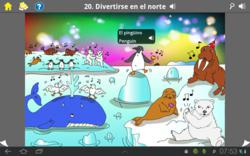 Noyo, a Boston-based educational software company, is delighted to announce that its Spanish language-learning app for tablets is now availabile in the Android Market. The Noyo app features over 1800 Spanish words and phrases in nearly 200 custom-illustrated scenes, reinforced by professional audio.

“Noyo Spanish works well across the spectrum of Android tablets, from the Galaxy Tab to the Motorolla Xoom,” says Noyo Spanish Product Manager, Micaya Clymer. “We’re excited to give teachers a way to send the classroom home with their students, and to give adult learners a fun, low-key way to review crucial vocabulary.”

Noyo isn’t like other vocab-building apps. Instead of rote memorization and dry flashcards, app users will go on a journey through engaging, lively scenes, peppered with key vocabulary items and useful phrases. Learning is reinforced by linking vocabulary with visuals, vibrant audio, and associated terms.

“Noyo was created to be a comprehensive language learning platform that is fun to use for students of all ages,” said co-creator Mike Sullivan, who serves as Chief Learning Officer. “Noyo quickly and intuitively leaves the user with a rock solid foundation of new Spanish vocabulary. We don’t run ads in our app to distract you from learning, or ask for in-app purchases to upgrade.”

The Noyo curriculum introduces vocabulary in context to provide a strong foundation for language learners. Individual words are embedded in relevant scenes, and humorous phrases tie them all together and show the vocabulary in action. Noyo Spanish is organized into eight vocabulary units, each with its own set of assessment questions to test user progress.

Features of Noyo’s Spanish app for Android include:

The Noyo Spanish app is available at an introductory price of $7.99 in the Android Market. Noyo offers a 100% guarantee on this app for those who purchase from Android Market; users who aren't pleased with the app can email support(at)noyo(dot)com for a full refund.

Noyo Spanish is also available for the Kindle Fire and the iPad. More information can be found at http://www.noyo.com.

Noyo is a startup headquartered in Boston, MA. It is dedicated to providing engaging, cost-effective, high-value learning apps to language learners of all ages.