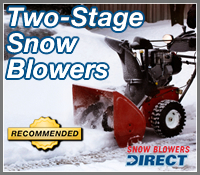 These 2-stage snow blowers are made for heavy snows, powering through deep drifts with ease.

According to Schrader, most retailers are loyal to whatever is on its shelves.

However, SnowBlowersDirect.com isn’t your ordinary retailer. The online superstore specializes exclusively in snow blowers and carries more than 90 models of snow throwers, as well as a full array of snowblower accessories from leading national brands, such as Ariens, Cub Cadet, Husqvarna and Toro.

According to Schrader, these two-stage snow throwers are versatile enough to clear paved and unpaved surfaces, making them ideal for any homeowner.

By providing the recommendations and reviews, SnowBlowersDirect.com hopes to arm shoppers with enough ammunition to pick the perfect two-stage snow thrower for their needs.