Attorney Chris Davis is celebrating the five-year anniversary of his book, “The Ten Biggest Mistakes That Can Wreck Your Washington Accident Case,” which has helped inform thousands of Washington residents about the personal injury legal process. 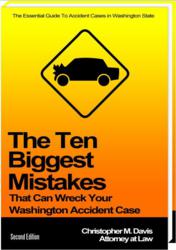 There is a lot of misinformation out in the public, so I decided to offer the book for free to victims in hopes of correcting some of that misinformation.

In his nearly 20 years of legal practice, Chris Davis has seen how an uneven playing field negatively impacts injury victims as they pursue a claim and attempt to negotiate with insurance companies without the aid of an experienced attorney.

In 2007, Davis decided that in addition to his work as a personal injury lawyer at the Davis Law Group in Seattle, he wanted to find a way to level the playing field and educate victims about their rights and legal options as they pursue a personal injury claim. As a result, he wrote and published “The Ten Biggest Mistakes That Can Wreck Your Washington Accident Case.”

“I wrote the book to create awareness among accident victims and to help them protect their rights,” says Davis, who has provided thousands of copies of the book free of charge to residents of Washington State. “There is a lot of misinformation out in the public, so I decided to offer the book for free to victims in hopes of correcting some of that misinformation.”

Studies on the personal injury claims process suggest that victims will receive a settlement that is as much as three times higher by hiring an attorney than if they pursued the claim alone. This discrepancy, Davis says, is the result of misinformation and the common mistakes that people make when handling their own claim.

“Most people pursuing a claim do not realize how adversarial the process is until it’s too late,” Davis added. “It is important that you be your own best advocate throughout the entire process because the insurance companies are primarily interested in their own bottom line.”

Davis’s book is part of an entire series of legal guides that addresses numerous personal injury-related topics, called the Washington Accident Books. Anyone interested in learning more about the books or ordering a free copy should visit http://www.WashingtonAccidentBooks.com or call the Davis Law Group at 206-727-4000.

Christopher M. Davis, founder of the Davis Law Group, has been a licensed attorney in the state of Washington since 1993. He has tried dozens of personal injury cases to verdict and has successfully handled and resolved hundreds of accident claims. He has been a Washington ‘Super Lawyer' for seven years in a row for his expertise and success in litigating personal injury claims. You can learn more about the firm by visiting: http://www.DavisLawGroupSeattle.com.