Tickets Go On Sale This Friday December 14th At 10AM! 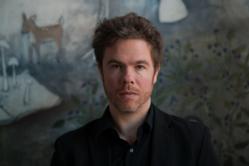 “How refreshing and inspiring it is to encounter a young artist whose achievements match his ambitions.”—The Washington Post

Josh Ritter & The Royal City Band will celebrate the release of The Beast In Its Tracks with a North American tour, that will begin in Cincinnati at the Taft Theatre on April 14th! All concert tickets are bundled with a unique musical package including a redemption code to download The Beast In Its Tracks upon release date. Ticket purchasers will also receive an immediate download of the album’s first single, “Joy To You Baby.”

Reserved tickets, $30 and $25 (plus applicable fees), go on sale this Friday, December 14 at 10:00 AM at http://www.ticketmaster.com, http://www.tafttheatre.org, the Taft Theatre Box Office and all Ticketmaster outlets including select Kroger stores. Charge by phone at 1.800.745.3000.

The Beast In Its Tracks, the new album from renowned singer-songwriter Josh Ritter, will be released March 5 on Pytheas Recordings. Of the record, Ritter says, “In the year after my marriage ended, I realized that I had more new songs than I’d ever had at one time. Far from the grand, sweeping feel of the songs on So Runs the World Away, these new songs felt like rocks in the shoe, hard little nuggets of whatever they were, be it spite, remorse, or happiness.”

This is the sixth full-length recording from Ritter, who has been widely heralded by critics and fans alike. The record can be pre-ordered at joshritter.com and iTunes and the first single, “Joy To You Baby,” is now available to be purchased as a limited edition hand-numbered 7” single and digital download.

Recorded during 2011-2012 at the Great North Sound Society in Parsonsfield, Maine, The Beast In Its Tracks continues Ritter’s longtime collaboration with producer and keyboard player Sam Kassirer. As Josh describes, “I hadn’t composed this stuff, I’d scrawled it down, just trying to keep ahead of the heartbreak. They needed to be recorded like that. We needed to work fast, make decisions quickly, keep the songs as spare as they could be kept, and above all never allow ourselves to blunt the sharp edges. Some of the songs were mean or evil. So be it.”

The new album follows Ritter’s 2010 release, So Runs The World Away, of which Bob Boilen from NPR Music declared, “I’ve come to expect good records from him...but this one took my breath away,” while the Boston Globe praised, “quite sensational…marks the finest music he has made.”

In 2011, Ritter made is debut as a published author with his New York Times Best-selling novel, Bright’s Passage (Dial Press/Random House). Of the work, Stephen King writes in The New York Times Book Review, “Shines with a compressed lyricism that recalls Ray Bradbury in his prime . . . This is the work of a gifted novelist.”