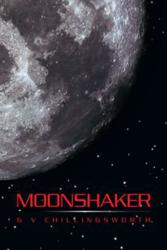 The aliens, thinking this to be an act of aggression, set out to try and destroy the satellite. Can the human scientists, trapped out of time, save their world?

In G V Chillingsworth’s thrilling science fiction novel “Moonshaker” (published by Trafford Publishing) – which will be featured in the 2013 Bologna Book Fair – scientists must rush to save the Earth when the moon is shoved out of its orbit by a meteor strike.

Dr. Raul Western creates a satellite – the Moonshaker satellite – that can utilize an impulse gun to correct the moon’s orbit. However, when it is fired in space, sabotage causes it – and its occupants – to travel back in time 65 million years.

In a corresponding story, the inhabitants of an alien planet called Yendor are setting forth to colonize Earth before their home planet is destroyed by a dying star. As they are approaching Earth, and are receiving information from an outpost that is circling it, the Yendor outpost is destroyed by the Moonshaker satellite’s massive shockwave from the fact that it has just torn a hole in the fabric of space and time.

The aliens, thinking this to be an act of aggression, set out to try and destroy the satellite. Can the human scientists, trapped out of time, save their world?

About the Author
G V Chillingsworth was born in Manangatang, Victoria in 1958, and was raised and went to school there before becoming an apprentice motor mechanic in Robinvale. Upon completion of apprenticeship, he decided it was time to start traveling. After spending almost a year in Emerald, Queensland, Chillingsworth went back to Dandenong, where he spent another several months before once again heading north, this time to Darwin. Working in the construction industry for a number of years, Chillingsworth joined the army as a mechanic, working out of Puckapunyal and then being transferred back to Darwin.

After almost six years in the army, Chillingsworth went into business in the cleaning industry, and after 15 years finally realized that he could write. He has attained the rank of black belt in judo, enjoys most sports and travel and has found a passion or snow skiing.