New book tells an engaging tale about Coco the Cat and the urgent message he receives. 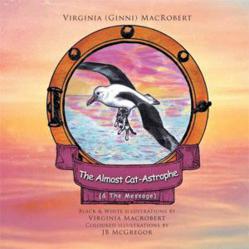 When author Virginia Macrobert’s dream of sailing around the world came true, she shared her sailing adventures with her dog, Henry and at times various crew in her first book, Gin’s Tonic, Ocean Voyage, Inner Journey. Her second book, Nautical Tails, Emails from a Sea Dog, tells of the same voyage through Henry the Dog’s eyes via fictional emails sent to his cat friend, Ellen in Hong Kong. Now in her third book, she introduces another lovable character that leads to The Almost Cat-Astrophe & The Message.

Coco the Cat seems like an ordinary ship’s cat except that he is frequently up to some mischief. His best friend, Henry the Dog (of the Nautical Tails fame), and his owner suffer heart-stopping moments watching his perilous antics. Coco has been raised on a sailing boat at sea and is perfectly at home in this environment. Unknown to them, his antics are deliberate and the ocean creatures trust him with their far-reaching urgent message. This message is a matter of life and death. But would anyone believe a cat, especially one as mischievous as Coco?

As with the author’s previous books, The Almost Cat-Astrophe & The Message entertains and at the same time delivers an important message that will resonate with readers. Coco the Cat is another delightful character that children will love and learn from. They will surely look forward to future sailing adventures with best friends Coco the Cat and Henry the Dog.

About the Author
Virginia (Ginni) MacRobert is an Australian who was raised on a farm in country Australia. She lived in Hong Kong for many years, raised a large family there and had long dreamed about sailing around the world. She eventually sailed with her dog Henry, and later added crew, a cat called Coco De Mer, on a voyage that was full of adventure. Her story is told is her book Gin’s Tonic, Ocean Voyage, Inner Journey which was published in 2010. Henry the Dog has told his story in Nautical Tails, Emails from a Sea Dog.

Xlibris books can be purchased at Xlibris bookstore. For more information, contact Xlibris at 1-800-618-969 or on the web at http://www.Xlibris.com.au.