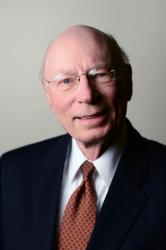 The Duncan School of Law has a strong academic program of legal education and I am confident that Parham will continue to enhance the program.

Lincoln Memorial University (LMU) President B. James Dawson has announced the appointment of Parham H. Williams, Jr., as interim vice president and dean at the LMU-John J. Duncan School of Law (LMU-DSOL). He will also serve as professor of law.

“It is with great enthusiasm that I welcome Dean Williams to Lincoln Memorial University,” Dawson said. “The Duncan School of Law has a strong academic program of legal education and I am confident that Parham will continue to enhance this program. He will also play the crucial role of guiding LMU-DSOL through American Bar Association accreditation. We could not be in better hands.”

A native of Mississippi, Williams earned a bachelor of arts and law degree at the University of Mississippi. In 1965, he received his LL.M. degree from Yale University School of Law. He began his legal career practicing military law as a first lieutenant, JAG, in the United States Air Force. Following his military service, Williams went into private practice for a year before being elected as a district attorney with the Fourth Circuit Court District in the State of Mississippi. He later joined the ranks of academia as an associate professor, professor, associate dean and eventually dean at his alma mater, the University of Mississippi School of Law. Williams’ academic specialties include evidence, criminal procedure, criminal law and professional responsibility.

His extensive experience as dean includes proven success in fund raising, managing faculty and resolving student issues. Additionally he has authored and co-authored many articles in professional journals and publications and presented many lectures and presentations before national, regional or state-level meetings. Williams has also chaired or served on many American Bar Association/AALS Site Inspection Teams.

Williams will begin his tenure at LMU-DSOL immediately. He will be responsible for leading the University through the ABA accreditation process including overseeing the development of the self-study and preparation for the site visit. He will work closely with strategic planning consultant Leary Davis in developing a long-term, sustainable strategic plan for LMU-DSOL. Williams is married to Polly Franklin Williams, Ph.D. The pair has four children and 10 grandchildren.

The Tennessee Board of Law Examiners (TBLE) has granted LMU-DSOL approval through 2017. The TBLE approval allows all the School’s graduates to apply to sit for the Bar Exam in Tennessee. The Doctor of Jurisprudence program at LMU-DSOL has approval from the Commission on Colleges of the Southern Association of Colleges and Schools (SACS).

The Lincoln Memorial University-Duncan School of Law (LMU-DSOL) is located in Knoxville’s Historic Old City Hall Building. LMU-DSOL is an integral part of LMU’s values-based learning community and is dedicated to preparing the next generation of lawyers to provide sound legal service in the often underserved regions of Appalachia and beyond. For more information about LMU-DSOL, call 1-800-325-0900, ext. 5303 or visit us online at http://www.lmunet.edu/law.