Company formation numbers rose during the third quarter of the year in Swansea, according to data in the latest Duport Business Confidence Report for the area. 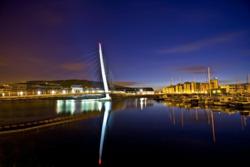 With so many new companies setting up there, the city looks set to become a hub for business start-ups in years to come

Swansea: The third quarter of the year saw a rise in company formations in Swansea, according to the latest Duport Business Confidence Report for the city.

There were 299 new company registrations between July and September, which is a 9% rise on Q3 2011. This, together with a rise in UK company share, suggests the economy of Swansea may be recovering from the worst effects of the recession.

The rise company formation could be linked to the ongoing redevelopment of the area. The aim of the redevelopment is to transform Swansea into a leading European Waterfront City that will drive the local economy by attracting tourists and businesses.

“The redevelopment of Swansea is clearly having an effect on the local economy, as company formations have been rising steadily since 2008.”

“With so many new companies setting up there, the city looks set to become a hub for business start-ups in years to come.”

The Duport Business Confidence Report for Swansea provides detailed economic data on everything from company closures to business naming trends, helping to give an overview of the local economy. More information can be found at http://www.duport.co.uk/swansea.