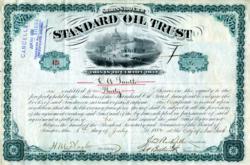 The Standard Oil Trust stock certificates were issued in 1882 and were printed by the Franklin Bank Note Company. The certificate was hand signed by John. D. Rockefeller, Henry Flagler and Jabez Abel Bostwick and is over 130 years old.

The Greek Bond Certificate is from the Kingdom of Greece and was issued in 1898 for 100 pounds. This debt instrument is a 2.5 Percent 20 year bond and is unusual because it has guarantees from France, Great Britain and Russia in the event of default. The certificate has an ornate blue border with vignette statues of Aphrodite, Apollo, Athena and Hypocrites. In addition there is the Greek Kingdoms Coat of Arms. This item also has a 10 shilling orange tax stamp dated 1899. This is a vertical format BOND and is over 114 years old.

Certificates are collected and given as gifts because of their historical significance, beauty and artwork, autographs, notoriety, as well as many other factors. The supply of new certificates reaching the collector market has been substantially reduced due to changes in state laws and stock exchanges rules. Many companies are no longer required to issue physical stock and bond certificates, a process called “dematerialization”.

Scripophily.com -
The Gift of History is the internet’s leading buyer and seller of collectible stock and bond certificates and has had items on loan for display in the Smithsonian’s Museum of Financial History in New York. The company has been featured on CNBC, USA Today, Associated Press, Reuters, Nightline, Today Show, Baltimore Sun, and Washington Post and in many other media publications. The company also offers an old stock research service at OldCompany.com and offers high resolution scans for publications. Scripophily.com has over 17,500 selections including
Scripophily.com / Old Company Research Service is the successor company to all material published by the Marvyn Scudders Manuals, the Robert D. Fisher Manuals, and the Herzog & Co., Inc. obsolete research services, which have been performed continuously since 1880. We are the leading provider of authentic stock certificates, autographs, and old company stock research services.