Project leaders for Atlantic Yards unveiled a model chassis that will be used in the 32-story B2 residential tower in Brooklyn. The use of modular technology in a building this high could lead to major changes in the construction industry. 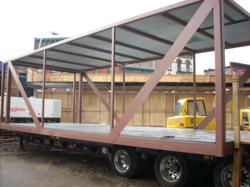 The prototype modular chassis for B2 was unveiled at the groundbreaking. Nine-hundred and thirty modules will come together to form 363 apartments of various sizes.

New York City developer Forest City Ratner Companies “broke ground” Tuesday morning on the tallest modular building in the world, a 32-story residential tower known as B2, part of the Atlantic Yards development in Brooklyn, N.Y. Taking a new twist on groundbreaking, rather than use shovels, project leaders unveiled a prototype modular chassis for B2 during the ceremony.

As with most modular construction, the B2 tower will consist of individual modules that are built in a controlled factory environment and later transported to site and craned into place. In this case, union workers will build 930 modules in a Brooklyn factory, where they will finish the units to a nearly live-in-ready status. The units will come together to form 363 apartments of various sizes.

“We wanted to maximize what was done in the factory to minimize the amount of work needed onsite,” explained David Farnsworth, Principal with Arup, the engineering firm involved in the extensive research and development for the project.

The modules will come complete with paint, fixtures and structural connections, and will blend in with the building’s façade, Farnsworth said.

While that degree of offsite fabrication is not new to the modular industry, the height of the building is. Until now, most modular buildings have remained under six stories due to developers’ perceptions about modular and a lack of investment in engineering for taller modular structures.

Bill Flemming, President and CEO of Skanska USA Building – the general contractor for the project -- spoke at the groundbreaking and noted that the project represents a “milestone for the construction industry” because of the substitution of modular in place of the traditional process in a building this high.

Tom Hardiman, Executive Director for the Modular Building Institute, the international trade association that has represented the commercial modular industry for 30 years, agreed that this project is a game changer that could help the industry to grow and venture into new territory.

“Every major industry in the world has advanced in automation, efficiency and productivity. The construction industry has largely been the exception until now,” Hardiman said.

“We are very excited about the prospect of a 32-story modular building,” said Hardiman. “This project proves what savvy investors, developers and contractors already know – that modular construction is safer and more resource efficient, and reduces the construction schedule without sacrificing quality or durability. In short, it’s greener, faster and smarter."

“With more than 10 million square feet of multi-story permanent modular construction projects delivered over the past several years for various federal agencies, as well as the education, multifamily housing, retail and commercial sectors, this tried and tested method is ready for prime time,” Hardiman said.

About MBI
The Modular Building Institute is the international nonprofit trade association that has served the modular construction industry for 30 years. Members are suppliers, manufacturers and contractors involved in all aspects of modular projects -- from complex multistory solutions to temporary accommodations. As the voice of commercial modular construction, MBI expands the use of offsite construction through innovative construction practices, outreach, education to the construction community and customers, and recognition of high-quality modular designs and facilities. For more information on modular construction, visit http://www.modular.org.