A summation of the 2012 CalChess Gradelevel Chess Championships. 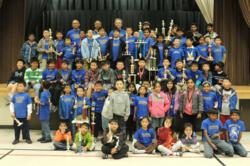 Mission San Jose Elementary School once again proved itself to be the strongest elementary chess team in Northern California.

On December 14-16, over 400 young chess players from all over Northern California competed in Pleasanton at the CalChess Northern California Grade Level Championships. The event which was run by the Berkeley Chess School in conjunction with CalChess attracted several national chess champions and players from all the major chess organizations in the Bay Area. At Stake for the kids was the distinction of being a state chess champion.

The Kindergarten section of the tournament featured many children who, despite their young age, are already playing like seasoned pros. Top honors for school team in this section went to Weibel Elementary School from Fremont. The individual State Champion, also from Fremont, was Amar Dhami. Amar, who trains with Coach Chris Torres the Scholastic Coordinator for CalChess and President of the Torres Chess & Music Academy, was the only kindergartener to win all five of his games. The Kindergarten section also featured a three way tie for second place between Samik Pattanayak, Sean Parker Evans and Andrew Liang who all escaped a very difficult tournament with only one loss.

The first grade section was dominated by players from Mission San Jose Elementary School from Fremont. This was the third year in a row that first graders from MSJE have taken first place at the CalChess Grade Level Championships. The star of the MSJE team was Kevin Pan. Kevin, who is also coached by Chris Torres, scored a perfect 5/5. His team mate Stephen He finished close behind Kevin with four wins to his name. Chinguun Bayaraa, Maurya Palusa, and Dylan Devinney also tied for second place with four wins.

The Mission San Jose Elementary School chess team really shined in the Second Grade section. Rishith Susarla and Annapoorni Meiyappan each won all five of their games, won large trophies, and the title of Grade Two State Champion. According to MSJE head coach Joe Lonsdale, this was the first time that two players from the same school ended tied as Co-State Champions. Chess Coach Chris Torres says of Rishith’s performance, “Rishith has always been a first rate chess talent. His road to the top has featured more near misses than any other student I have ever coached. I am unbelievably happy that Rishith Susarla is finally a State Chess Champion and won’t be surprised to see him win a national title in the next few years.” This was the second year in a row that the Mission San Jose Elementary School chess team has taken first place at the CalChess Grade Level Chess Championships.

Grade three featured the play of Ben Rood who had just finished an incredible performance at the World Youth Chess Championships in Maribor, Slovenia. In round five Ben’s streak of winning State Champion titles was rudely interrupted by a rare blunder followed with the precise play of Advait Budaraju. Advait’s win over Ben Rood allowed him to earn his first ever State Championship title as well as lead Regnart Elementary School to a first place finish. Advait Budaraju was followed closely by Zarek Azam who is also from Cupertino. Ben Rood ended up finishing third with a score of four out of five.

Grade four was an ultra-competitive section that included a four-way tie for second place. Josiah Stearman, a student at the Berkeley Chess School, played excellent perfect chess and finished with a perfect 6/6. The very strong Charlie Jones was one of four players to finish with five points out of six. Also tied for second place was Amir Dhami, Luke Zhao ad Iddo Zohar. Amir, Luke and Iddo all were selected for the 2012 Torres Chess and Music Academy All Star Team by Chris Torres and are all good friends. Luke Zhao also has the distinction of leading Mission San Jose Elementary School to another first place finish. John Andrew Chan, also from MSJE, was only a half point behind Luke and finished with 4.5/6 to place sixth overall.
Grade five was won by former Torres Chess and Music Academy student and current Weibel star Anthony Zhou. Anthony played brilliant chess but, unfortunately for him, the rest of the Weibel team was not up to the task of bringing home the first place trophy. The infamous Bullis Charter School of Los Altos played great chess top to bottom and now has a first place trophy to show off.

Now that the CalChess Grade Level State Championships are in the books, the top players will be busy preparing for the State Championship Tournament in April. Many will be attending Winter Chess Camps such as the ones run by the Torres Chess and Music Academy, the Berkeley Chess School and Bay Area Chess. Chess fans will be waiting with anticipation as one can never tell who will take home the title in the world of Scholastic Chess.