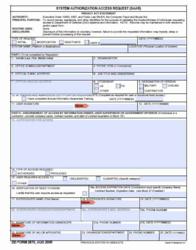 Laws.com legal form division has announced the launch of DD 2875 form. In this month alone, laws.com added three military forms to its list of army forms. Laws.com has already launched DA 31 form and DA 4856; the company said that laws.com working on launching various army forms to make all DA and DD forms available in laws.com Legal forms section. The company already host number of DA forms, and the addition of DD 2875 form will bolster its position as an online resource for free legal forms. The users can freely download the form DD 2875 by visiting laws.com Legal forms section.

DD 2875 system authorization access request form is used to request access to Department of Defense computer system. Up on submitting DD 2875 form to the approving authority, they will review the application for granting access to the computer system.