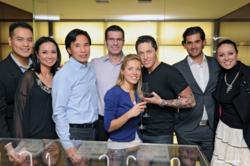 The four lucky couples pose for a group shot at the De Beers Fifth Avenue Boutique.

De Beers Diamond Jewellers, the ultimate destination for engagement rings and diamond jewellery, partners with Colin Cowie Weddings for the annual Valentine’s Day Weddings Event, held at the iconic landmark on the world’s most romantic day of the year. Four lucky couples will exchange De Beers wedding bands and say “I do” when they receive their own private, personalized, lavish wedding ceremonies created by celebrity event planner Colin Cowie at the Empire State Building on Valentine’s Day, the only time when couples are able to marry at the building.

De Beers Diamond Jewellers hosted these four lucky couples at the De Beers Fifth Avenue Boutique on Friday, February 10. The wedding bands were unveiled to the couples during this intimate champagne cocktail.

Couples from across the country submitted videos describing their love stories and why they should be chosen to marry or renew their vows at ESB. After 16 semi-finalists were selected by a panel of experts, the public voted for their favorite couples. The winning couples who will share the most memorable day of their lives with their family, friends and the world at the iconic landmark are:

De Beers Diamond Jewellers is the ultimate destination for diamond jewellery. With over 120 years of diamond experience to draw on, De Beers Diamond Jewellers go well beyond the ‘4C’s’ of cut, clarity, colour and carat weight to capture unmatched Fire, Life, and Brilliance, providing the most beautiful diamonds in the world set in magnificent designs. The creation of timelessly elegant diamond jewellery – from selecting the world’s finest diamonds to impeccable craftsmanship and sophisticated designs – is the De Beers difference, an absolute expression of the Art of Diamond Jewellery.

De Beers is proud to be the only brand to demonstrate the beauty of its diamonds, using the De Beers Iris. This proprietary technology, found in each De Beers store provides clients with an objective way to see the beauty of their diamond through the eyes of an expert.

Each piece of De Beers jewellery is certified with a De Beers passport and each polished diamond above 0.20 carats is microscopically branded with the De Beers Marque. The De Beers Passport documents the specifications of your diamond jewellery and is your guarantee that every single De Beers diamond is natural, untreated, conflict-free and responsibly sourced and crafted.

The De Beers Marque, using technology patented by the De Beers Group, is invisible to the naked eye and ensures that each diamond is individually catalogued in the De Beers diamond registry, confirming its identity as a De Beers official diamond, to provide clients with a total peace of mind.

A DIAMOND IS FOREVER

Angela and Lubin leaving the store with their De Beers wedding bands.

Lela and Steph taking a closer look at their De Beers wedding bands.

The four lucky couples pose for a group shot at the De Beers Fifth Avenue Boutique.