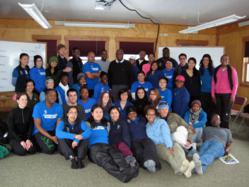 Launched in March of 2011, the NPS Academy is designed to introduce diverse undergraduate and graduate students from across the country to career opportunities with the National Park Service.

I would much rather give up a week of vacation than risk losing these awesome natural treasures.

Volunteers from colleges and universities across the U.S. will join together throughout the month of March to conserve national parks and launch green careers with the Student Conservation Association (SCA), the national leader in youth service and stewardship.

“I would much rather give up a week of vacation than risk losing these awesome natural treasures,” states SCA member Timarko Mitchell, a senior from the University of Arkansas at Pine Bluff.

NPS Academy addresses two key Park Service priorities: developing a workforce that reflects the broad diversity of American society, and engaging more youth in the great outdoors. Academy members will be introduced to a range of NPS career possibilities through seminars, workshops, field trips, and recreational activities. After successfully completing the March course, participants will serve in SCA internships this summer at a variety of national parks to gain the skills and experience necessary to be eligible for employment with the NPS.

“Through hands-on field programs in urban and wilderness settings, SCA connects thousands of African Americans, Hispanics, Asian Americans, and other youth of color to their environment every year,” notes SCA Vice President for Diversity Reginald “Flip” Hagood. “As the National Park Service estimates 12% of its employees started their careers with SCA, we are confident that NPS Academy will provide students with an effective pathway to professional opportunities and help the parks build a more inclusive 21st century workforce.”

Hagood also notes that SCA’s roots go back to Grand Teton National Park, as the first SCA volunteers reported for duty there in 1957.

Sydney Taylor, a senior at Savannah State University, had never stepped inside a national park until last year’s pilot NPS Academy at Grand Teton. As a result of the Spring Break course, he explored Park Service career options, connected with an NPS mentor, and returned to Wyoming as an SCA intern in July. “I was going to become a teacher but now all I can see myself doing is working for the National Park Service,” Sydney says. “I’ve grown so much as a person through this opportunity.”

Students Choose Conservation as Constructive Spring Break Alternative
Scores of other college students from around the country will descend on Everglades and Joshua Tree National Parks throughout March in SCA’s fifth annual Alternative Spring Break, sponsored by American Eagle Outfitters.

In the Everglades, students will remove invasive plants from the infamous “Hole-in-the-Donut,” a 9,900-acre former agricultural tract plagued by destructive Brazilian pepper plants. A restoration project begun in the early 1990s has thus far treated approximately 65% of the affected area. Participants will also remove invasives from the Chekika area near the Nike missile base, remove an old farming fence near Long Pine Key campground, and perform extensive trail maintenance and repair.

At Joshua Tree, students will eradicate thousands of tamarisk, an especially thirsty exotic that steals water from native plants and threatens dune systems in the park. They will also eliminate Asian mustard, fountaingrass, and other nonnative species, plant native shrubs and grasses, conduct raptor population and habitat surveys, and monitor desert tortoises.

The SCA Alternative Spring Breaks will take place at Everglades on March 5-9 and March 19-23, and at Joshua Tree March 11-17 and 25-31. Thirty students will participate each week, including four full work days and a single day of field trips and environmental education provided by national park rangers and others. Participants will camp on site and their travel, gear, meals, and a small stipend are all underwritten by American Eagle Outfitters.

Through hands-on internships, Alternative Spring Breaks, urban conservation programs and other award-winning initiatives, SCA fosters an enduring ethic of stewardship among young adults aged 15-25. Founded in 1957, SCA has engaged more than 65,000 individuals in parks, forests and cities, and 60% of SCA alumni remain active conservationists through their careers and community activities.

“Conservation service is an important step toward prolonged sustainability,” SCA’s Hagood states. “Caring for a place directly leads to caring about it, and America simply cannot afford a citizenry that does not value these extraordinary natural resources. If we lose them, they are gone forever.”

The Student Conservation Association
The Student Conservation Association is the only national organization that develops tomorrow's conservation leaders by providing high school and college students with service opportunities in all 50 states, from urban communities to national parks and forests. More than 4,200 SCA members annually render over two million hours of service to America's public lands. Since 1957, SCA has helped to develop new generations of conservation leaders, inspire lifelong stewardship, and save the planet. SCA is headquartered in Washington, D.C. and maintains offices in Anchorage, AK, Boise, ID, Charlestown, NH, Oakland, CA, Pittsburgh, PA, and Seattle, WA. For more information, visit http://www.thesca.org.