Slagsmålsklubben step out of Sweden with their new album, "The Garage"

Swedish electro-dance outfit Slagsmålsklubben reach for new territories with their album release, "The Garage". The first single "Jake Blood" is fast becoming a dance-floor favourite across the UK, and "The Garage" is already opening new doors for the band. 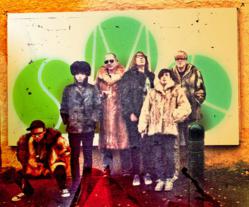 "Jake Blood" is the first Slagsmålsklubben single to be taken from the album. Available for download from digital stores this week, it is receiving overwhelming support from club DJs around the country.

Slagsmålsklubben are long-time favourites of electro-dance DJs in the UK. Pete Tong invited them to play a gig on his tennis court in Ibiza, and their last release "Brutal Weapons" was Annie Mac's 'secret song' on Radio 1. Their fourth album, "The Garage", is due to hit stores on 11th April 2012, and it is shaping up to be their seminal release.

"Jake Blood" is the first Slagsmålsklubben single to be taken from the album. Available for download from digital stores this week, it is receiving overwhelming support from club DJs around the country. Earlier this month, the forthcoming album track "Snälla TV Plz" was announced as a semi-finalist in the International Songwriting Competition, placing above 16,000 other entries, and judged by the likes of Frank Black (The Pixies), Robert Smith (The Cure), Tom Waits, Nelly Furtado and Youssou N'Dour amongst many other top industry figures.

The group's name is a comical literal translation of ‘Fight Club’, just like the movie. Often abbreviated to ‘SMK’ by lazy journalists and non-Swedish speakers, that is what they are offering: Swedish Modern Keyboard. Synthpop, bitpop, chiptune – call it what you will – it’s mood-affirming music that makes people dance.

Fan-made videos litter YouTube, some of which are so creative that they have received millions of views and celebrity shout outs. Most recently, from Stephen Fry on Twitter, who couldn't quite believe that one of the videos was made by a fan for a school project.

More than just a studio band, Slagsmålsklubben spend their summer weekends playing to mud-covered festival goers. In the last seven years, they have performed in front of over 2 million people. They performed at last year's EuroCultured in Manchester, and went on to play a headline gig to a 5,000 strong audience at Gröna Lund, in Stockholm. The band will be returning to the UK later this year, bringing their brand of electro-insanity to Bestival in September.

"The Garage" will be released on 11th April 2011.
"Jake Blood" is available to download now from Amazon UK.