NFL players who excel on the field and in the community continue an NFL-USO tradition initiated more than 45 years ago as they embark on a week-long tour and uplift the spirits of troops stationed in the Middle East. 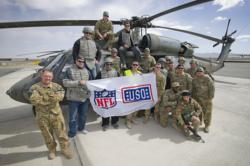 I'm thankful for the opportunity to visit our service men and women overseas, said Takeo Spikes. "They take an extraordinary amount of pride in protecting our country and I'm very grateful for their commitment. This experience has been amazing.

Attributed to Jason Baker:
“I feel blessed to be able to go and share our appreciation directly with our service men and women in theater (Romans 12:8-21). It’s great that the NFL and USO facilitate this so that we can draw further attention to the service and sacrifice that these men and women choose to make.”

Attributed to Alex Mack:
“The USO tour is a great opportunity to show our appreciation to our military. I think it’s really good for us to see what they go through and what they do. It’s great for them to be able to see that people care about them. Then we can further understand how important their work is and just how hard their job really is.”

Attributed to Takeo Spikes:
"I'm thankful for the opportunity to visit our service men and women overseas. They take an extraordinary amount of pride in protecting our country and I'm very grateful for their commitment. This experience has been amazing."

Attributed to Eric Winston:
“The USO tour has provided me a small glimpse of dedication and passion that our service men and women exude on a daily basis. Hopefully our visit will be uplifting for them and provide a small token of appreciation."

About the USO
The USO (United Service Organizations) lifts the spirits of America’s troops and their families millions of times each year at hundreds of places worldwide. We provide a touch of home through centers at airports and military bases in the U.S. and abroad, top quality entertainment and innovative programs and services. We also provide critical support to those who need us most, including forward-deployed troops and their families, wounded warriors and their families and the families of the fallen.