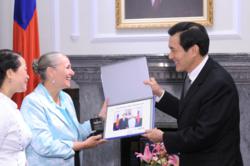 Knowledge is power and human rights education empowers people to be the best that they can be, knowing that no law, no person or rule can deny them their right to dignity and peace

Other acknowledgements came from Mr. Irving Sarnoff, Co-Founder of Friends of the United Nations: “Youth For Human Rights International, under the outstanding leadership of Dr. Mary Shuttleworth and supported by the Church of Scientology, has done an incredible job in the promotion and distribution of the United Nations Universal Declaration of Human Rights.”

Dr. Elizabeth McKinney, Chief Executive Officer of the Global Project Development Foundation, said, “Knowledge is power and human rights education empowers people to be the best that they can be, knowing that no law, no person or rule can deny them their right to dignity and peace.”

The 9th Annual Youth for Human Rights World Tour launched from Los Angeles and traveled to Mexico, Liberia, Togo, Cameroon, Ethiopia, Taiwan and Japan. In Taiwan, the tour met with President Ma Ying-jeou to introduce him to the program and materials. While in Mexico, they released “Artists United for Human Rights,” a booklet featuring 34 prominent Mexican performing artists promoting the 30 articles of the UN Universal Declaration of Human Rights. In Ethiopia, Youth for Human Rights International, in partnership with the Ethiopia Human Rights Commission, released a booklet covering the articles of the Universal Declaration of Human Rights in Amharic, the official language of Ethiopia and second most-spoken Semitic language in the world after Arabic. In each country they held conferences and meetings with other national and state officials and prominent nongovernment organizations to arrange implementation of Youth for Human Rights educational materials and curricula.

Youth for Human Rights International has circled the globe nine times in as many years, traveling more than a quarter of a million miles to promote human rights education to officials, educators, and nongovernment organizations in 80 countries.

The purpose of Youth for Human Rights International is to teach youth about human rights, specifically the United Nations Universal Declaration of Human Rights, and inspire them to become valuable advocates for tolerance and peace. For more information visit http://www.youthforhumanrights.org .

The Scientology religion was founded by author and philosopher L. Ron Hubbard. The first Church of Scientology was formed in the United States in 1954 and has grown to more than 10,000 Churches, Missions and affiliated groups and millions of members in 167 nations.