With 6.7 million bats already dead, scientists believe the fast-spreading disease called White-nose Syndrome could lead to the extinction of some species. 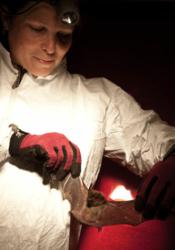 Dr. DeeAnn Reeder, a professor at Bucknell University, is a leading expert on White-nose Syndrome

“This is like bringing small pox to the New World. It is surely an unprecedented wildlife disaster for North America.”
- Dr. DeeAnn Reeder, Bucknell University

More than six million bats are dead, and millions more are expected to fall victim to a disease known as White-nose Syndrome, or WNS. First identified in the northeastern United States, WNS has wiped out an estimated 95% of Pennsylvania’s bat population and is quickly spreading across the country. It was most recently discovered in Missouri, Delaware and Alabama.

“This is like bringing small pox to the New World. It is surely an unprecedented wildlife disaster for North America,” said Bucknell University professor Dr. DeeAnn Reeder. Reeder is one of the country’s leading experts on WNS, and one of the researchers responsible for identifying the cause of the disease in 2011. “We can’t stop this thing. It’s marching across the country and we’re going to see some extinction.”

Reeder has been studying the disease since shortly after it was discovered in a New York cave in 2006. Since then it was been detected in at least 17 other states. Few bats exposed to the fungus that causes WNS survive.

“I was recently in a mine where I should’ve seen 10,000 or so bats. There were 150,” Reeder recalled. “We don’t know if the survivors have some immunity, or are lucky. If they’re just lucky, we’re in trouble.”

While Reeder and other scientists are turning their attention to surviving bats, and the clues they may provide in slowing the spread of WNS, the impact of the devastation to the country’s bat population could be severe. Reeder says for every one million bats that die, 692 tons of insects that would have been eaten by the bats, survive the summer months. That includes mosquitoes and agricultural pests. Recent studies show bats provide billions of dollars worth of agricultural and pest-killing services.