Information about "Bath Salts" is being added to the Narconon Drug Education Program after a new designer drug has appeared in a very unlikely form – bath salts. While not actually the bath salts you bathe with, you would not know from the packaging. The drug is sold legally as “bath salts” or “plant food” and is labeled as not for human consumption. 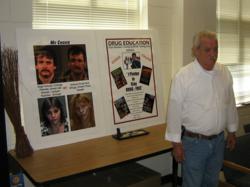 Because you can buy these drugs [bath salts] so easily and they are so addictive and dangerous, unless we as a nation get some kind of control over this situation, a bath salt epidemic could easily creep up on our country

This drug is a stimulant and the effects of the drug are supposed to be similar to those of cocaine and methamphetamine. It has especially gained popularity amongst teens and young adults. Possibly stemming from the misconception that the drug is safe when nothing could be further from the truth.

Last October, the government put a ban on the key ingredients that bath salts had consist of. Since that time, chemists have slightly altered the chemical make-up of the drug to avoid the implications of this temporary ban. The three ingredients that are included in the yearlong ban are Mephedrone, 3,4 methylenedioxypyrovalerone (MDPV) and Methylone. Upon further studies, the DEA will decide if the ban will become permanent or not.

One of the main reasons that this drug is appealing to individuals is because it is legal. There are now currently drug tests that test for some of the more popular chemicals, but because the chemical makeup of these drugs continue to change, it is impossible to develop a drug test that will remain effective. The same thing goes for laws that try to combat the use of these drugs. As soon as rumors start that one chemical is going to be banned or made illegal, there are street chemists that are busy in their labs developing slightly altered legal versions the drugs.

Because these drugs are being sold as bath salts or plant food and labeled as not for human consumption, there is no real regulation on what can be put into these mixtures. Mary Rieser, Executive Director of Narconon of Georgia had this to say about the matter, “Because you can buy these drugs [bath salts] so easily and they are so addictive and dangerous, unless we as a nation get some kind of control over this situation, a bath salt epidemic could easily creep up on our country”.

In many places the epidemic has already begun. Bath salt related deaths have begun cropping up all over the country, with the most noted over this past summer. According to local law enforcement officers over the winter, the incidents of bath related calls have decreased. However, authorities worry that the numbers may increase over the following summer again. The government is trying to get a hold on this problem before it gets to the point where it could become epidemic. Unfortunately, drug manufacturers have been able to keep one up on the authorities by simply changing the ingredients in the blend. The only hope is if there is an all-encompassing bill that is passed by the Federal Government.

Most people who use this drug report feelings of euphoria that are similar to the effects of cocaine, methamphetamine and ecstasy. When a user snorts this substance it can have the potential to keep the person awake for up to forty-eight hours. Chronic users have said they have reached the point where they were able to sleep a few hours a night. But when a person first starts using this drug, the stimulant effects of it are quite strong and of long duration due to the length of time the drug stays in the users system.

These drugs have the potential to be very dangerous, despite the fact that they can be bought legally. There are also indications that they have the potential to become very addictive. If you or a loved one are struggling with an addiction to bath salts, please seek help right away. While the long term effects of these drugs have yet to be determined, it is well known that the short term effects can be very dangerous and even life threatening.