Jeff Rutenbeck, Champlain College dean, to lead one of the top schools of communication in the nation. 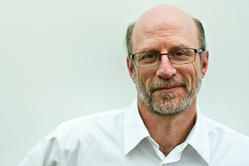 "Dr. Rutenbeck is an innovator with an abiding respect for tradition who represents the future of communication," said Provost Scott Bass.

American University has named communication technology expert Jeffrey Rutenbeck to be the new dean of the School of Communication.

Rutenbeck is currently a professor and the founding dean of the Division of Communication and Creative Media at Champlain College in Vermont. His academic focus has been on research on social and cultural change and the profound impact of digital technology on society. Rutenbeck will assume leadership of the school on July 1, 2012.

“I'm honored and energized to join such an accomplished and dynamic community,” said Rutenbeck. “The talent in the School of Communication is world class.”

Rutenbeck has consulted extensively with some of the world’s most prominent communication and technology enterprises including Time Warner, Microsoft and the USAF Space Command. He is the author of Tech Terms: What Every Telecommunications and Digital Media Professional Should Know as well as more than 30 journal articles and book chapters.

Under his leadership at Champlain College, he oversaw a tremendous expansion and integration of programs in communication, public relations, professional writing, graphic design and digital media and digital filmmaking along with groundbreaking undergraduate programs in game design, broadcast and streaming media, game art and animation, creative media and an MFA in emergent media.

For more than 40 years, American University’s School of Communication has delivered a professional education for undergraduate and graduate students, with a focus on public affairs and public service using the resources of Washington, D.C. The school features 14 degree programs including a newly introduced M.S. in Media Entrepreneurship that will begin in the fall of 2012. The School of Communication boasts more than 50 faculty members and 1250 students, with small class sizes to emphasize a more hands-on approach to teaching.

In addition, the establishment of the Center for Environmental Filmmaking, Investigative Reporting Workshop, J-Lab: Institute for Interactive Journalism, and the Center for Social Media, along with strategic partnerships with major media organizations have showcased the School of Communication’s reputation as a school willing to foster growth in innovative and unique educational communication programs.

Rutenbeck succeeds Dean Larry Kirkman who will return to teaching in the School of Communication.

American University’s School of Communication, located in Washington, D.C., is among the top communication schools in the nation. Princeton Review Best Colleges rates AU a great school for journalism majors and Hollywood Reporter ranks AU as one of the country’s top film schools. In addition, the school’s film and media arts program is one of only 13 schools in the United States who are members of CILECT, the international association of film and television schools.