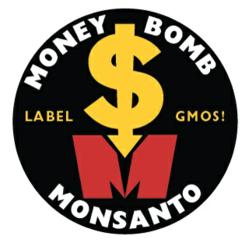 Labeling GMOs is a reasonable and common sense proposal to inform consumers about what they’re eating. It’s time for Monsanto and the biotech industry to stop hiding behind this blatant loophole that denies Americans their basic right to know what they’re

Between May 1 and May 26, a broad coalition of food, farm, health, public interest, and environmental groups across the country, joined by leading organic food companies, will attempt to raise one million dollars to support the California Right to Know Genetically Engineered Food Act, a citizens' ballot initiative. The online fundraising campaign is expected to reach more than 6 million people, through websites and e-newsletters.

The campaign’s organizers – who have already secured a $1 million matching gift if they achieve their goal – say that in addition to raising money for the California campaign, they hope to show Monsanto and the rest of the biotech industry that the public overwhelmingly supports GMO labeling, and that through a combination of direct democracy and grassroots fundraising, citizens are determined to pass laws requiring food producers and marketers to label GMOs.

“Big Biotech and Big Food are going to spend millions to defeat this citizens’ initiative in November,” said Ronnie Cummins, Director of the Organic Consumers Association and its allied grassroots lobbying arm, the Organic Consumers Fund. “They’ve already attacked this initiative, intentionally distorting basic facts about its impact on consumers and food companies. However, no matter what Monsanto says, the polls show that 90% of California voters support GMO labeling. We know from our nearly 80,000 members in California that consumers are wary of genetically modified foods, and that they are fed up with the federal government’s failure to act on labeling laws. Today, the people are speaking up – and donating to this cause – in unprecedented numbers.”

The collaborative online fundraiser is a first, organizers say. It has brought together a wide range of bi-partisan organizations, including nonprofit and for-profit, health, consumer interest, organic farmers, and environmental groups. “The fact that so many different organizations, representing disparate points of view have set aside their differences in order to form a united front against powerful corporations is a testament to how important this issue is, and how widespread the support,” Cummins said. “People realize that passing this law in California is the first critical step toward national GMO labeling laws.”

The first of the online fundraising appeals launched on May 1. On May 2 - the day that thousands of volunteers will deliver almost a million petitions signed by registered voters to County Clerks' offices in all 58 counties in California – many other groups will join in the campaign through letters to their members and promotions on their websites. The online fundraising campaign will end on May 26, the 20th anniversary of the FDA’s decision, under the leadership of ex-Monsanto lawyer Michael Taylor, to declare as federal policy that GMO and non-GMO foods are “substantially equivalent” and that therefore genetically engineered foods and food ingredients would not need to be labeled.

“For the past 20 years, Americans have been denied their basic right to know what’s in their food and how it’s produced as a result of the pseudo-scientific theory of “substantial equivalence,” said Dave Murphy, founder and Executive Director of Food Democracy Now! and its allied grassroots lobbying arm Food Democracy Action! “In a free market, access to information and transparency is essential for consumers to make informed choices. Labeling GMOs is a reasonable and common sense proposal to inform consumers about what they’re eating. It’s time for Monsanto and the biotech industry to stop hiding behind this blatant loophole that denies Americans their basic right to know what they’re feeding their families.”

All funds raised through this campaign will run through the Organic Consumers Fund, a 501(c)4, and will be used to support the California Right to Know campaign. Any organizations still interested in participating in the campaign should contact Katherine Paul, 207.653.3090, katherine(at)organicconsumers(dot)org.

The California Right to Know Genetically Engineered Food Act is a citizen’s ballot initiative that if passed, will require that all genetically engineered foods and food ingredients be labeled, and will ban the routine industry practice of labeling or marketing GMO-tainted foods as “natural.”