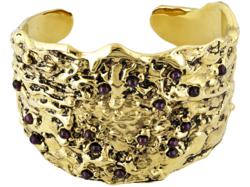 Wendy Williams recognizes the importance of celebrating women’s unique style and we were delighted to provide gifts for the members of her show’s studio audience during this milestone season.

Jewelry Television® (JTV), the world’s largest broadcast retailer of jewelry and loose gemstones, has partnered with “The Wendy Williams Show” to provide gifts for audience members during a May 9 episode. The giveaway was part of a series of special events leading up to the syndicated weekday program’s 500th episode.

“The Wendy Williams Show” studio audience members were given jewelry pieces, including earrings and bracelets from JTV’s Double Happiness™ Collection, as a surprise gift during yesterday’s show.

“Since its launch in 2009, 'The Wendy Williams Show' has gained a loyal following in the daytime talk show arena,” said Pat Bryant, chief marketing officer at JTV. “Wendy Williams recognizes the importance of celebrating women’s unique style and we were delighted to provide gifts for the members of her show’s studio audience during this milestone season.”

An exclusive collection featured on Jewelry Television, Double Happiness™ includes jewelry with exotic gemstones such as turquoise, quartz and amethyst in gold-tone wire and other intricate settings. Inspired by designer Stephanie Wells’ world travels and extensive knowledge of the fashion industry, Double Happiness™ offers trendy design with an artisan flair.
The Double Happiness™ Collection, available at http://www.JTV.com, ranges from $24.99 to $149.99.

About Jewelry Television ®
Jewelry Television® (JTV) is the only broadcast shopping network that focuses exclusively on the sale of jewelry and gemstones. The privately-held company was founded in 1993 and broadcasts high definition programming 24 hours a day, seven days a week, to more than 80 million unique households in the U.S. Jewelry Television® was recently ranked the 14th largest retailer of jewelry in the U.S. by National Jeweler. JTV.com is the fifth largest jewelry destination on the internet according to Internet Retailer’s Top 500 Guide for 2010. For more information, visit JTV.com.