American Rivers releases its annual top ten list of rivers at risk, with the Potomac, "the Nation's River" topping the list because of pollution and potential Clean Water Act rollbacks. 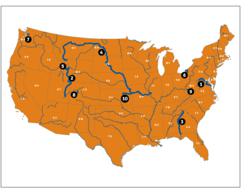 America's Most Endangered Rivers of 2012

This year’s Most Endangered Rivers list underscores how important clean water is to our drinking water, health, and economy.

American Rivers named the Potomac River, known as ‘the nation’s river’ as it flows through the capital, the most endangered in the country. While the Potomac is cleaner than it used to be, the river is still threatened by urban and agricultural pollution– and it could get much worse if Congress rolls back critical clean water safeguards.

As our country commemorates the 40th anniversary of the Clean Water Act this year, the Potomac is emblematic of what’s at stake for rivers nationwide. American Rivers launched a national call to action, giving citizens the opportunity to contact members of Congress and speak up for clean water.

“This year’s Most Endangered Rivers list underscores how important clean water is to our drinking water, health, and economy,” said Bob Irvin, President of American Rivers. “If Congress slashes clean water protections, more Americans will get sick and communities and businesses will suffer. We simply cannot afford to go back to a time when the Potomac and rivers nationwide were too polluted and dangerous to use.”

Before the Clean Water Act was enacted in 1972, the Potomac was a cesspool of sewage and industrial pollution. Thanks to the Clean Water Act, the Potomac and rivers across the country are cleaner and safer for drinking, boating, and fishing. But the Potomac is still suffering – a University of Maryland report card has given the river a “D” grade for water quality for the past two years.

“The Clean Water Act is the reason the Potomac River is no longer called a 'national disgrace.' Most of the palpable problems are gone; however, there are many emerging threats that can't be seen. Residents of the Washington D.C. metro area– including the President and Congress– need to realize they are composed mostly of Potomac river water and they need to protect and enforce the laws that safeguard their health,” said Ed Merrifield, President of Potomac Riverkeeper.

“We need strong federal leadership as we redouble our efforts at the local level to achieve the goal of a healthy, clean Potomac,” said Hedrick Belin, President of the Potomac Conservancy. “We look forward to partnering with American Rivers, Potomac Riverkeeper, and others to continue to make progress cleaning up the Nation’s River. This regional treasure contributes so much to our community’s quality of life, and our neighborhoods deserve healthy, clean streams and creeks.”

“When members of Congress fill a glass of water or drink their morning coffee, that water comes from the Potomac River. It’s time to draw the clear connections between healthy rivers, drinking water, and public health in Washington, DC, and in communities nationwide,” said Irvin.

American Rivers called on Congress to kill any legislation that weakens the Clean Water Act or prevents the Environmental Protection Agency and the U.S. Army Corps of Engineers from restoring protections for small streams and wetlands under the Act. American Rivers also called on the Obama Administration to finalize guidance clarifying the scope of the Clean Water Act and issue a rule-making to ensure that all waters get the protections Americans expect and deserve.

Now in its 27th year, the annual America’s Most Endangered Rivers® report is a list of rivers at a crossroads, where key decisions in the coming months will determine the rivers’ fates. Over the years, the report has helped spur many successes including the removal of outdated dams, the protection of rivers with Wild and Scenic designations, and the prevention of harmful development and pollution.

America's Most Endangered Rivers of 2012:

For the fourth consecutive year, America's Most Endangered Rivers is sponsored by The Orvis Company, which donates 5% of their pre-tax profits annually to protect nature.