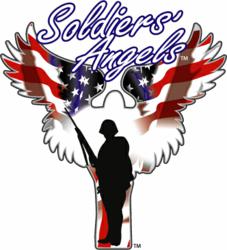 Soldiers' Angels and Whiskey Rodeo are teaming up the week before Memorial Day for a "Meet & Greet" and concert memorabilia fundraisers.

Helping veterans get instruments is a good fit, and we can’t wait to present one lucky soldier with a guitar on May 27.

Whiskey Rodeo, the self-described "ultimate alcohol-selling, rabble-rousing southern-fried party rock band" has joined forces with military support nonprofit Soldiers' Angels to support the troops. All proceeds from select merchandise at the band's May 26 and 27 San Antonio shows will be donated to Soldiers' Angels.

As musicians, the band is particularly interested in supporting Soldiers' Angels Operation Harmony, a partnership with Yamaha that provides therapeutic music lessons for wounded troops and veterans. "Helping veterans get instruments is a good fit," Guitarist Chase Carpini points out, "and we can’t wait to present one lucky soldier with a guitar on May 27, thanks to Yamaha!"

Supporting the troops isn't anything new for the band. Even before they hooked up with Soldiers' Angels, Whiskey Rodeo's trailer was emblazoned with the words, "On Tour to Support the Troops." In addition, drummer Andrae is a disabled Iraq War veteran, and front man Greg Francescon's father is a Vietnam veteran, as is the band's business partner.

The band hopes this month's events are just the beginning of a long relationship with Soldiers' Angels. What they particularly like--in contrast to advocacy organizations they've proudly supported in the past--is that Soldiers' Angels is very hands-on in its activities. "We'd love to stay involved as much as we can for as long as we can," says Francescon. They are mentioning Soldiers' Angels at all the shows on their current tour, encouraging fans to support the troops by being a volunteer with Soldiers' Angels.

Whiskey Rodeo's support for Soldiers' Angels officially begins with a "meet and greet" at the Soldiers' Angels Support Center in San Antonio on May 22, 2012. For details, email csegner(at)soldiersangels(dot)org or visit http://www.whiskeyrodeo.com. As Carpini says, "Come to Soldiers' Angels to visit all the crazy guys in the band!"